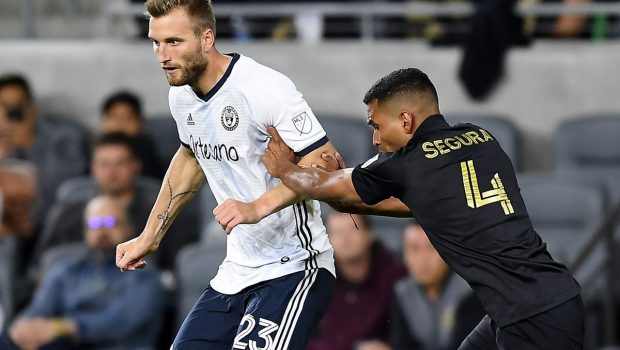 LAFC rallied from three separate deficits to force a 3-3 draw with the visiting Union last night.

Carlos Vela, Diego Rossi and Eddie Segura all scored goals for LAFC (1-0-1), which first trailed less than 30 minutes into the game and played catch-up on multiple occasions as they remained unbeaten two weeks into the MLS season.

Sergio Santos, Jakob Glesnes and Brenden Aaronson all scored for the Union (0-1-1), which rebounded from a 2-0 defeat at FC Dallas in the season opener. Aaronson’s goal came shortly after it was announced he was added to the roster for Team USA Olympic qualifying.

Vela, the MLS’s reigning MVP, not only scored his 50th career MLS goal, he also set a league record with a goal in 12 consecutive home games going back to last season. He delivered off a free kick from about 20 yards out in the 38th minute.

Santos gave the Union a 1-0 lead in the 29th minute when he put a bending ball off his left foot into the top left corner of the goal past Vermeer.

After Vela scored, Glesnes scored on an unexpected strike from 40 yards out off a free kick when his blistering shot found the upper left of the LAFC goal.

Aaronson gave the Union a 3-2 lead in the 69th minute when he took a feed from Santos in the penalty area, spun to his left and scored into the left side of goal past Vermeer. The two second-half leads for Philly lasted less than four minutes combined, however.

LAFC will now head back to CONCACAF Champions League play with a home game against Cruz Azul on Thursday and a return game between the teams March 18 at Mexico City’s Azteca Stadium.

The Union will next play their home opener, hosting the San Jose Earthquakes next Saturday.