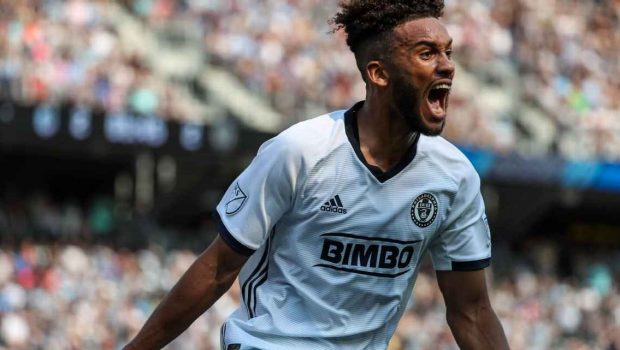 The Union can head into the Gold Cup recess atop the Eastern Conference if they defeat the New York Red Bulls at home tonight.

The Union (8-4-4) are currently one point better than Montreal, though they have two matches in hand. Jim Curtin’s team is part of a five-team logjam atop the East separated by just four points, with the Red Bulls (7-5-3) the fifth team in that mix on 24 points.

They ended a three-match winless spell Sunday with a 3-2 victory at Minnesota United, with Auston Trusty scoring the winner four minutes from time. Jamiro Monteiro and Haris Medunjanin scored first-half goals for the Union, who were pegged back twice before Ilsinho picked out Trusty with a cross almost immediately after his introduction.

The defender then did the rest with a deft first touch before beating Vito Mannone from close range. It was his first goal in 22 matches, with his other coming Sept. 15.

“Maybe we were a little bit off but showed a lot of grit and character on the road in a tough spot and came away with three points, and they were a needed three points,” Curtin said.

The Union are looking to reverse their fortune at home, with that three-match winless spell before Sunday’s victory all coming at home. Philadelphia had won five straight at Talen Energy Center before that swoon, though the job will be tougher without No. 1 keeper Andre Blake as he prepares to represent Jamaica at the Gold Cup.

New York enters this contest one of the hottest teams in the league and looking to run its unbeaten streak to six matches (4-0-1). The Red Bulls have posted back-to-back wins while recording shutouts in both after thrashing Real Salt Lake 4-0 at home last Saturday.

An own goal by RSL’s Marcelo Silva in the 58th minute opened the floodgates as Daniel Royer and Michael Murillo added goals for New York in a five-minute span immediately thereafter. Omir Fernandez added gloss to the scoreline seven minutes from time.

“This team is a real team and they stick together and they play for each other,” coach Chris Armas told the Red Bulls’ official website. “They run for each other, and this has been building. I mentioned it recently: The Atlanta game wasn’t a starting point, we said. It was a result of guys putting in a lot, and all of us doing a lot, right. That’s what it was.”

Murillo’s goal made him the 16th different Red Bulls player to find the back of the net, bettering the franchise record set in 2015.