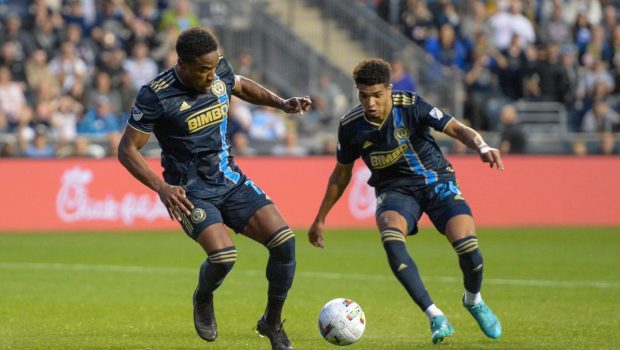 The Union are riding high in the MLS with 20 points.

But there is a big black mark on their resume:

They can’t hold a lead.

And yesterday made it five games in a row.

Daniel Gazdag scored for the Union who extended their unbeaten streak to four in a row following a 1-1 draw against the New York Red Bulls in Chester.

The Union (5-1-5, 20 points) weren’t able to come up with a victory despite playing with a man advantage from the 55th minute on.

Luquinhas scored the tying goal for the Red Bulls (5-2-4, 19 points) in the 66th minute. The Red Bulls pushed their unbeaten streak to five.

New York had won its first five away games and were looking to become the first team in league history to win six consecutive on the road to start a season.

The game was a defensive battle through the first 20 minutes as neither team had a solid scoring opportunity.

The Union earned a corner kick in the 22nd minute and Kai Wagner sent a sharp cross into the box which was nearly redirected before being cleared.

New York’s Dylan Nealis was whistled for a yellow card in the 26th minute for a reckless tackle against Jack Elliott.

In the 42nd minute, the Red Bulls’ Luquinhas had a shot saved by goalkeeper Andre Blake from point-blank range and the game eventually wound up scoreless at halftime.

The Union came out aggressive in the second half and went ahead 1-0 when Gazdag scored in the 47th minute. It was Gazdag’s sixth goal of the season after scoring four all of last season.

The game became chippy in the 51st minute with a number of players on both sides pushing and shoving after the whistle.

Nealis was given his second yellow card in the 55th minute, leaving the Red Bulls with 10 players the rest of the game.

The Red Bulls equalized in the 66th minute when Luquinhas got behind Jose Martinez and connected.

Julian Carranza stepped in to head the ball into the net for an apparent 2-1 advantage in the 80th minute. But the goal was disallowed after video review deemed Carranza to be offsides.

Despite seven minutes of stoppage time, the game ended in a draw.