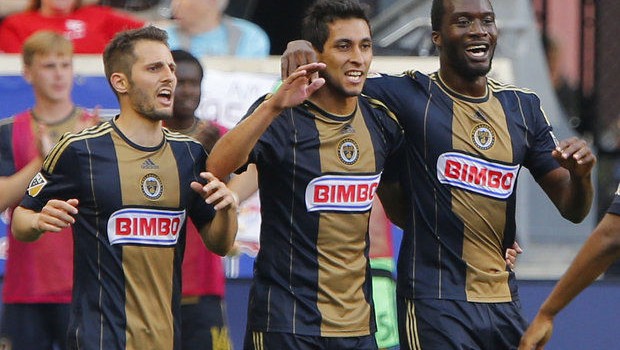 HARRISON, N.J. (AP) — Vincent Nogueira and C.J. Sapong (right above) scored a quick pair of second-half goals and the Union beat the New York Red Bulls 2-0 on Sunday for their second straight victory.

Nogueira opened the scoring in the 57th minute, tapping in Cristian Maidana’s 20-yard strike with a back-heel flick from just outside the 6-yard box. Sapong stunned the Red Bulls with another goal 5 minutes later. Fabinho’s run from midfield led the counterattack and Maidana earned his second assist of the match with a pass back to set up Fabinho’s layoff to Sapong.

The Union (3-7-3) earned their first road win in seven tries against the Red Bulls.

The Red Bulls (4-2-5) squandered a dominant first half with three shots crashing off the post. It was New York’s second scoreless game in a row after a nine-game run to start the season with at least one goal.