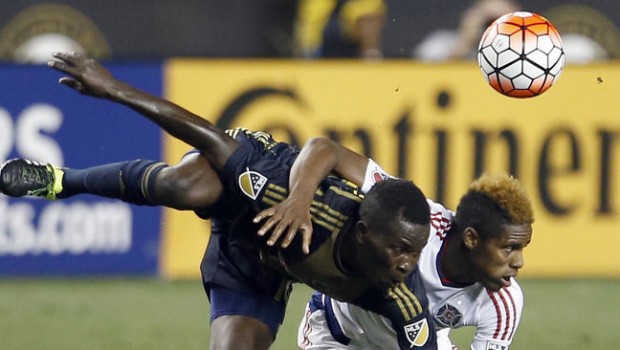 The Union are going to the U. S. Open Cup final.

And, for the second season in a row they will be the host.

Sebastien Le Toux scored the game’s only goal (his 15th all-time goal in USOC action, extending his own modern-era record) in the 74th minute as the Union beat the Chicago Fire 1-0 Wednesday night.

Sean Johnson made a pair of key saves during the first half, but an early injury to striker Gilberto forced the Fire to burn a sub just 21 minutes into the game and Frank Yallop’s side never really found their footing afterward. In the midst of another underwhelming Major League Soccer campaign, the Union find themselves yet again just 90 (or 120) minutes away from the first major trophy in club history. They will host the winner of the second semifinal between Sporting Kansas City and Real Salt Lake in the final on Sept. 30.

8′ — Johnson saves Maidana’s shot from the top of the box — Johnson made a sprawling save of Christian Maidana’s curling, far-post effort in the eight minute. After CJ Sapong received the ball 15 yards from goal, his first touch got away but found the left foot of Maidana, who Johnson did extremely well to deny.

24′ — Johnson stops Maidana’s again, Sapong pushes rebound wide — Johnson vs. Maidana was the theme of the first half, as the former thwarted the latter yet again in the 24th minute. Unleashing another left-footed shot from just outside the box, Maidana looked to have beaten Johnson to his left-hand post, but the young ‘keeper got down quickly and made the save. The rebound, however, remained in play and fell to the feet of Sapong, who could only hit the outside side netting from a tight angle.

74′ — Le Toux capitalizes on a poor defensive sequence — Shaun Maloney and Razvan Cocis combined for three failed or unattempted tackles at the top of their own penalty area, which provided Le Toux all the time and space in the world to wiggle free and hit a worm-burner just inside Johnson’s left-hand post, this time to a spot just out of reach.