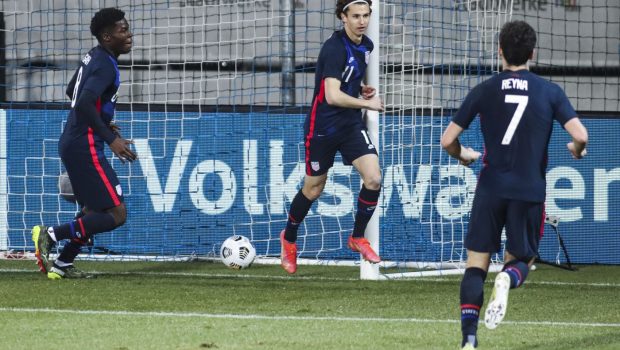 UNION ALUM BRENDEN AARONSON RINGS ONE UP FOR USA VS. JAMAICA!

By Harvey Hoffman and the Associated Press

Sergiño Dest scored his first international goal with a spectacular 25-yard shot, Sebastian Lletget added a pair of second-half goals and the United States beat Jamaica 4-1 in an exhibition at Wiener Neustadt, Austria.

Medford native Brenden Aaronson scored for the U.S. in the 53rd minute. Jamal Lowe got Jamaica’s goal in the 70th minute on a counterattack, chipping goalkeeper Zack Steffen after Andrew Gray slipped a pass by right back Reggie Cannon.

Aaronson played the second half as a substitute for Hershey’s Christian Pulisic, who returned to the U.S. lineup for the first time since October 2019.

“I know that when you win, you’re gushing about everyone, but I think he had a strong performance,” Berhalter said “He gave us verticality on the wing, he gave us calm, composure, made some really good plays, his pressing was really good.”

Because of the coronavirus pandemic, this was just the third match on a FIFA fixture date for the Americans since November 2019.