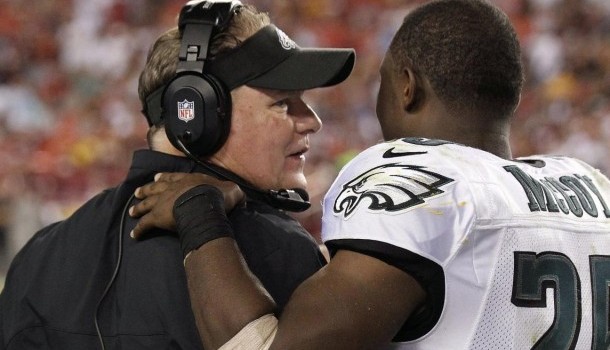 Chip Kelly’s reasons for trading LeSean McCoy may now be getting a lot clearer.

When the Eagles traded away their star running back McCoy to the Buffalo Bills, some commentators pointed to a slight dip in production, while others speculated of a falling out between coach and player.

Now we may know for sure.

According to a source with ties to NFL Films, the league has footage of running back McCoy “threatening to hit” Kelly during the last game of the season against the Giants. The source claims that the league knew McCoy would “be off the team months before” the trade was announced.

Several NFL spokespeople declined to comment, as did a member of the footage licensing department.

Since being dealt to the Bills in exchange for promising linebacker Kiko Alonso, McCoy hasn’t shied away from speaking out against his former coach and team.

Former running back LaDanian Tomlinson, now of NFL Network, discussed a conversation he had with McCoy on NFL Total Access, saying “[McCoy] talked about how he and Chip Kelly’s relationship had become a little strained, and he just did not think Philly was committed to him…He felt the writing was on the wall that they were trying to move on this offseason, and sure enough we have this trade.”

McCoy was on the Rich Eisen show, and said that that he and Tomlinson has similar issues in their careers. “He’s a guy that’s been in my shoes as far as being on a team for so long and then not seeing eye-to-eye,” McCoy said, “and maybe, potentially having to leave.” McCoy recently told The Philadelphia Inquirer’s Jeff McLane that he doesn’t feel Kelly values his marquee players: “I don’t think he likes or respects the stars. I’m being honest. I think he likes the fact that it’s ‘Chip Kelly and the Eagles.”

Many felt the trade was fueled by financial issues, as McCoy was set to count $12 million against the Eagles cap. However, the team then signed former Cowboy DeMarco Murray to a similarly hefty price.

McCoy described Kelly’s demeanor to McLane, stating “the tension – the this or that – he doesn’t like that.” This “tension” seemingly boiled over in the season finale, setting the eventual countdown on McCoy’s time in Philly.