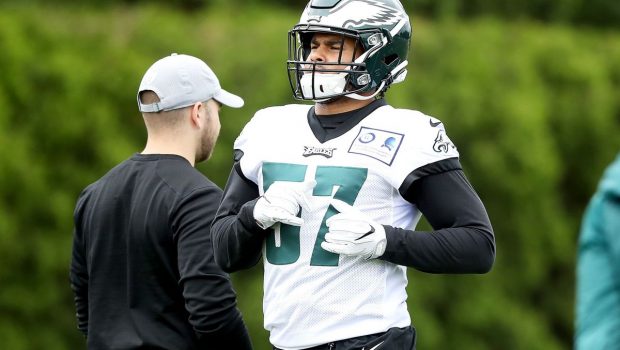 If you’re looking for an under-the-radar standout on the Eagles defense this season, look no further than T. J. Edwards, the undrafted free agent out of Wisconsin.

Edwards is a tackling machine and may have to start his career out on the practice squad after the Eagles signed Zach Brown to a deal this offseason.

Edwards is still a valued commodity, according to NFL.com’s Lance Zierlein:

The Philadelphia Eagles may have landed one of the steals of undrafted free agency in the form of former Wisconsin linebacker T.J. Edwards.

The 6-1, 242-pounder possesses a physical mindset that should mesh perfectly with the Eagles defense.

Stout four-year starter who shows up and does his job each week as a banger in the box with surprising ball skills to flip the field.

In 2018, he racked up 112 tackles, including 11.5 tackles for loss and three sacks. While he isn’t likely to produce those kinds of numbers as a rookie, he should slot in as a backup inside linebacker who can start in a pinch.

The rookie has already made a huge impression on assistant coaches, and with Carson Wentz signed to a huge deal, he could bring toughness and value to the position for years to come.