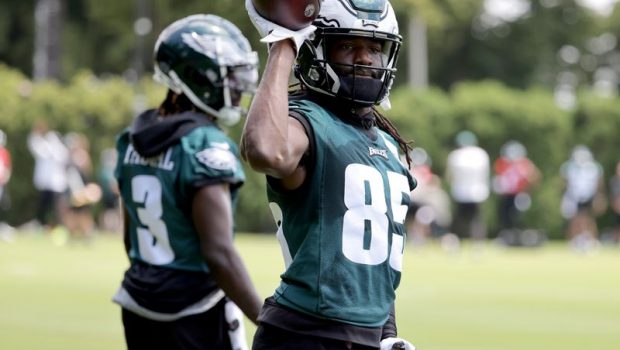 Eagles training camp is still 46 days away on July 26.

And after a couple of weeks of OTA’s, there is no doubt that the under-the-radar star was Dean Cain, who had a deep reception the first and played well in the second week.

Cain has 15 games of NFL experience with Pittsburgh and Indianapolis in 2019 and 2020, and he spent most of last season on the Eagles’ practice squad.

Cain also has the benefit of being the Colts’ sixth-round pick in 2018. That was Nick Sirianni’s first season as the Colts’ offensive coordinator. Cain began that season on injured reserve before getting waived later in the season.

He’ll probably have to beat out Greg Ward to get a final roster spot.

Their top four receivers are pretty much set with A.J. Brown, DeVonta Smith, Quez Watkins and Zach Pascal. It’s likely that Jalen Reagor will get the fifth spot, unless another team overwhelms the Eagles with a trade offer for the 2020 first-round pick.