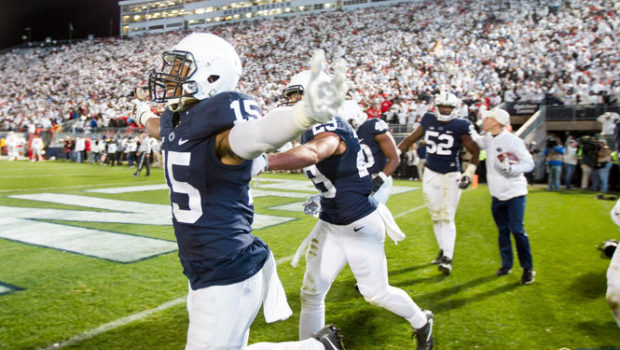 It is not an overstatement to use one word to describe Penn State’s upset of No. 2-ranked Ohio State last night:

Grant Haley returned a blocked field goal 60 yards for a touchdown with 4:27 left in the fourth quarter and the Nits upset the Bucks 24-21 for the Nittany Lions’ biggest win in the post-Joe Paterno era.

“It’s something you dream about as a kid,” Haley said. “Just running to the end zone and falling, it was a huge sigh of relief, like, everything, all the hard work this team’s put in coming into play against the No. 2 team in the country.”

After Penn State’s defense closed out the Nittany Lions’ first victory against Ohio State since 2011 with two sacks of J.T. Barrett, the white-out crowd of 107,280 at Beaver Stadium went nuts.

The Buckeyes (6-1, 4-1 Big Ten) had their 20-game road winning streak snapped and the Big Ten East race that looked like an inevitable march toward an Ohio State-Michigan showdown on Nov. 26 in Columbus, Ohio, just took a bit of a detour.

Two seasons ago the Buckeyes bounced back from an early loss and won the national championship. Last season one loss turned out to be enough to eliminate Ohio State from the College Football Playoff.

The Buckeyes are in much better position to recover.

Penn State is now in the mix in the East, but the Wolverines and Buckeyes still have the advantage. If they all finished 8-1 in the conference and the Buckeyes beat Michigan, Penn State — which has already lost to the Wolverines — would be eliminated from three-way tiebreaker because of a worse overall record.

The Nittany Lions will worry about that later.

“This isn’t a fluke win,” linebacker Jason Cabina said. “This is who we are. This is who we believe we can be and will continue to be.”

Trace McSorley cut the Ohio State lead to 21-14 early in the fourth quarter with a 2-yard touchdown run, and on the next Ohio State possession Cam Brown blocked Cameron Johnson’s punt to set up Penn State at the Buckeyes 28.

The Buckeyes were driving to try to seal the game, but it stalled and instead of padding their lead, they gave it up to Penn State.

The Buckeyes became the highest ranked team to lose to an unranked team this season. Problems with the passing game left them unable to put Penn State away. Barrett was 28 for 43 for 245 yards and he was sacked six times as the Buckeyes, especially right tackle Isaiah Prince, struggled to protect their quarterback.

“I think we put our O-line in bad spots early on in drives, so we’re in second and long and then we had to pass and that harmed us,” Barrett said.

For the first time in James Franklin’s three-year tenure as coach, Penn State beat a ranked team and the Nittany Lions got to celebrate with their field-rushing fans.