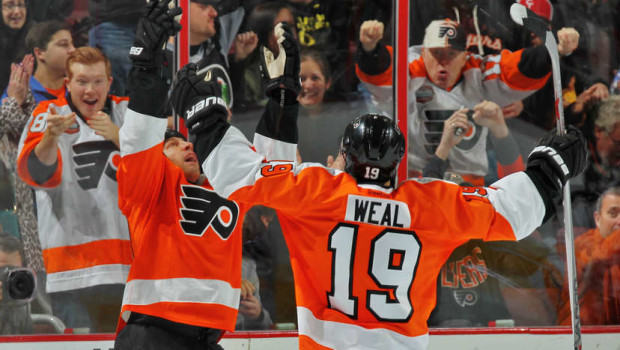 The Flyers are four points out of the second wild card into the Stanley Cup Playoffs from the Eastern Conference. Their next four games, including Saturday against the New Jersey Devils and Sunday at the New York Rangers, are against teams ahead of them in the standings.

The previous sentence is not an hallucination!

Umberger (above left) scored his first goal in 50 games to spark the Flyers to a 5-1 win against the Buffalo Sabres at the Wells.

Early in the second period of a scoreless game, Umberger one-timed a cross-ice pass from Sam Gagner past Buffalo goalie Robin Lehner. Then he looked up toward the rafters, arms extended high over his head.

“It was praying to the hockey gods; thank you,” said Umberger, who had not scored since Jan. 27, 2015. “… You don’t really practice how you’re going to celebrate; emotions take over. We all go through slumps, 10, 15 games. But that was a different animal.”

Michael Raffl had a goal and an assist for the Flyers, rookie center Nick Cousins scored his first NHL goal and had an assist, and Steve Mason made 41 saves for the Flyers (24-20-9), who ended a three-game losing streak (0-2-1). Brayden Schenn and Wayne Simmonds each had a goal.

Flyers rookie defenseman Shayne Gostisbehere has a 10-game point streak after assisting on Simmonds’ goal; he has two goals and 11 assists during his streak. He’s the first NHL rookie defenseman with a point in 10 straight games since Barry Beck of the Colorado Rockies in 1977-78, according to the Elias Sports Bureau, and is tied with Mikael Renberg (1993-94) for the longest point streak by a Flyers rookie.

Gostisbehere also is the first player to have at least one assist in nine straight games since Flyers center Claude Giroux and Pittsburgh Penguins center Evgeni Malkin had assists in nine straight in 2013-14.

Gostisbehere played two NHL games and five in the American Hockey League in 2014-15 season because of a season-ending knee injury sustained in November 2014, then spent the first month of this season in the AHL.

“If you were telling me I’d be doing this going into the season, I’d definitely said you were crazy,” Gostisbehere said.

Umberger scored in his first game back in the lineup after being a healthy scratch in five straight.

“It was tough,” he said. “You’ve got to be a good pro. Got to come to the rink looking for any kind of fun, anything you can do. You’ve got to remember you’re playing hockey. It’s still a sport, we’re still having fun out there. It’s a game. It’s not life or death; it’s a game. You’ve got to get back to that. Those five games I was out, I tried working on stuff on the ice. Really trying to score in practice as much as I could and hope it carries over. The pass by Ganger was everything. Just really second nature; I just one-timed a pass and didn’t think about it.”

Umberger said as excited as he was, the best feeling was seeing the reaction of his teammates. He said he even got a tap on the helmet from usually stoic coach Dave Hakstol.

“The best part of it was how excited the teammates were for me,” he said. “Probably more excited than I was. That was pretty cool.”

Said Mason, who played with Umberger with the Columbus Blue Jackets, “It’s great to see. You feel for him. He takes it hard the way this season has gone for himself. It was definitely nice to see him have some success here tonight. Was a beautiful goal. Especially a veteran guy like that, it’s a tough position and he’s a proud guy. He hasn’t let it affect his work ethic in practice. That’s a credit to him. Goes to show if you work hard, you finally get rewarded.”

The goal was the first of four in a row for the Flyers, all in the second period.

“That gave us a big spark,” Umberger said. “Was a big period for us. We had a lot of penalties, so it wasn’t a perfect period. But we capitalized on our chances, and the penalty kill did its job. It set us up for the two points. Came at a crucial time of the game, so that made me feel good.”

Simmonds scored his 20th goal to make it 3-0 at 8:33. Gostisbehere wound up for a shot from the high slot, but Sabres forward Marcus Foligno knocked the puck off his stick. It rolled to Simmonds, who beat Lehner from the right faceoff dot.

Raffl made it 4-0 when he split the Sabres’ Zach Bogosian and Sam Reinhart to get to the net and score at 15:57. The goal was Raffl’s second in 17 games.

Philly had scored five goals in its previous three games and was coming off a 4-1 home loss to the Anaheim Ducks on Tuesday.

“This was huge,” Simmonds said. “Our game against Anaheim, everyone was disappointed. We felt that was probably one of our worst three games this year. We knew we had to come back and we had to be a lot better. We didn’t start off the greatest, but I thought the overall effort was a lot better.”

That effort included a strong contribution from the penalty kill. Hakstol just wanted to see less of it needed.

“Our penalty-killers did an outstanding job, but we spent a lot of energy killing penalties,” Hakstol said.