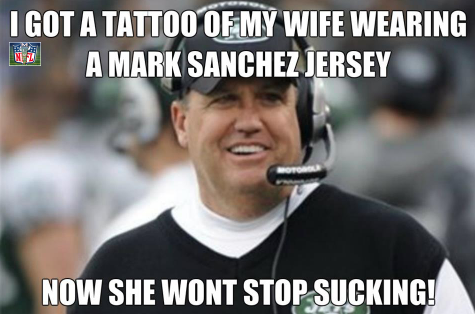 You know your career has hit bottom when your former coach goes through the pain of tattoo removal: It must be one of the 12 stages of grief for Eagles quarterback Mark Sanchez, who is less than a month away from being a free agent.

When ex-Jets coach Rex Ryan became the new head coach of the Buffalo Bills, the logical question popped up: What about that tattoo?

You know, the tattoo that depicts Ryan’s wife wearing a No. 6 Jets-colored Mark Sanchez jersey. While talking about a potential reunion with Sanchez in Buffalo, Ryan mentioned that he does indeed still have the tattoo.

Well, he no longer has the ink in its original design. According to a story in the Wall Street Journal — which used to be a serious newspaper! — Ryan got the tattoo’s colors changed from Jets green to Bills blue.

And Ryan even talks to the WSJ about the tattoo change.:

Mr. Ryan flew to the Phoenix area last week for media appearances during Super Bowl week. On Thursday, he called a Scottsdale, Ariz., tattoo parlor called Old Town Ink, said Ben Verhoek, an artist there. Mr. Verhoek said Mr. Ryan explained his dilemma like this: “It’s like a girl in a jersey and I wanted to change the colors of it.”Mr. Verhoek realized who the customer was only when the coach, clad in a Buffalo Bills tracksuit, and his wife showed up at the shop Friday afternoon. The artist looked at the tattoo and then at Mrs. Ryan.

“Is that supposed to be you?” he asked.

He took 20 minutes to shade green into blue, while Mr. Ryan and all the tattooists made small talk and watched the documentary series “The First 48” on TV. Mr. Verhoek said he charged the minimum rate, $80, and Mr. Ryan tipped on top of that.

Ryan knows that if he doesn’t win with the Bills, he probably won’t get another chance as an NFL head coach. With the tattoo change, he is going all-in for his next — and perhaps last — opportunity to lead an NFL team.

He’s never been one for half measures.