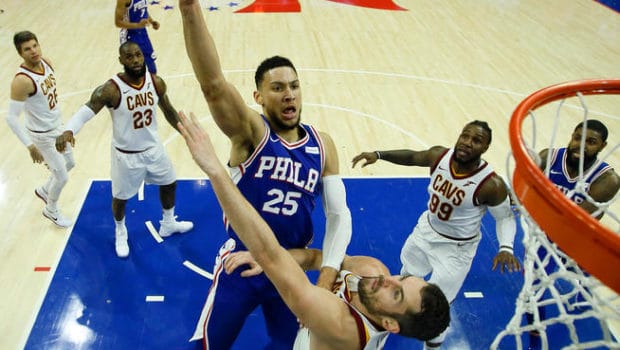 UH, ABOUT THOSE SIMMONS-JAMES COMPARISONS? SIXERS FANS MIGHT WANT TO PUT THEM ON HOLD!

The buzz around the NBA has been that Sixers’ super rook Ben Simmons reminds us of LeBron James, a dead-bang Hall of Famer when and if he decides to retire.

That didn’t sit too well with one of James’ Cavs’ teammates:

“I wanted to guard him a little differently than how I’ve been watching other teams guard so far off him and let him get a head of steam and go downhill,” Jae Crowder said after Simmons finished with 10 points on 5-for-11 shooting, eight rebounds, two assists and three steals in 36 minutes before leaving early with a sprained right ankle. “I feel pretty good. It was a good challenge.”

Crowder’s adjustment to crowd the Sixers’ 6-10 point guard was effective. Simmons left the game midway through the fourth quarter after turning his ankle on the offensive end and did not return. X-rays taken after the game were negative, and he will be reevaluated by 76ers team doctors today.

“I’m honored that a young, gifted kid like himself would even allow me to be in his life and mentor him and be like a big brother to him,” said James, who shares an agent, Rich Paul of Klutch Sports, with Simmons. “I’m honored by him and I’d continue to do that as long as he wants me to.”

Simmons came into the night leading all rookies in scoring (18.5 points), rebounding (9.1) and assists (7.7). As impressive as those numbers are, they still have a ways to go to match the 28.6 points, 8.1 rebounds and 8.5 assists James is putting up in his 15th season.

Sixers coach Brett Brown tried to shield his star rookie from the James talk, calling it “reckless” to mention Simmons in the same breath as greats like James or Magic Johnson after just 18 games as a pro.

“I get it. I understand it. But Ben hasn’t done and we haven’t done anything yet,” Brown said. “And personally, I have been privileged. Sort of my NBA life has been [James’]. I’ve seen LeBron from day one. And you’ve seen him grow. He’s amazing. He is amazing. On the court, how he handles his responsibility on that stage. Off the court, I think he’s got an element of grace, how he handles himself and carries the NBA logo with a tremendous amount of pride.

“I’ve seen him internationally with the gold-medal stuff and had the United States clearly in our, his best interests. So, you say, compare him to LeBron, ask me later. A few years from now.”

“I’d be annoyed, too, if somebody was comparing me to a rookie,” Simmons said. “You shouldn’t compare me to somebody like that. Not yet.”

“There’s a lot of stuff we got to get better at,” Sixer center Joel Embiid said. “I hate losing but I think that’s actually good. We got our ass kicked and we’ll go back and learn. We can’t take any days off, we can’t play comfortable. We just have to keep working hard and get better.”