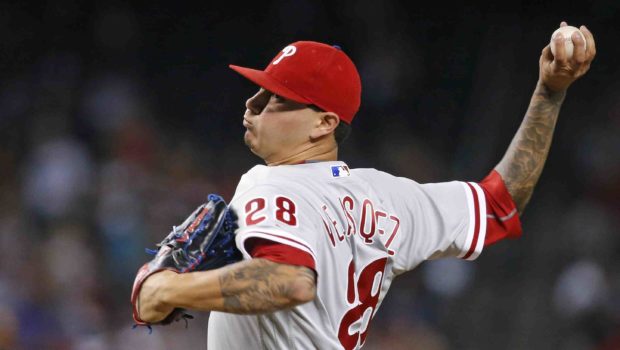 “I’m just going to take it as it is and move on from there,” Velasquez told MLB.com. “The thing to do is accept the fact that it’s just a flexor strain and try to be as optimistic as possible. I know mentally it’s frustrating. If you get over that hump mentally, you’ll be fine.”

Velasquez’s final pitch was a 90.9-mph fastball to J.T. Realmuto in the second — after throwing a 95-mph heater to Giancarlo Stanton to get a first-inning strikeout looking.

But Velasquez said it was with that pitch that he felt discomfort.

“The pitch I threw to Stanton, after that I felt a little numbness,” Velasquez said. “You could tell when you don’t have your full velocity, when you get to [the] extension side, there’s a little irritation. You know your arm, you know your body; I knew it was time to mention something.”

It isn’t the first time Velasquez has dealt with this type of injury. He had the same type of setback while in the Minors.

“Some people bounce back a week, two weeks. Who knows?” Velasquez said. “I’m very optimistic with myself. I’ve been gone a whole year from [Tommy John surgery]. I know what it’s like, so I’m not worried at all.”

Mackanin said he has seen Velasquez struggle with velocity in the past, but the right-hander had always overcome it in later innings.

“We’ve seen him before where he wondered why he’s throwing 90, 91, 92,” Mackanin said. “We’ve seen him do that before and regain his velocity after an inning or two. So I wasn’t concerned because I wondered if he was throwing two-seamers and trying to start off easy and save it.”

However, Mackanin said that in the second inning, catcher Cameron Rupp gave him a nod that something was up with Velasquez.

“I immediately took him out of the game,” Mackanin said. “I’m not taking chances with anybody.”