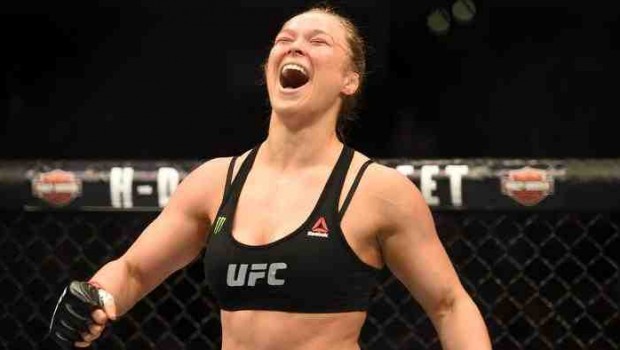 If you were a late arrival last night at the Staples Center in L. A., you missed all the fireworks.

Ronda Rousey was that good and that quick.

Makes you appreciate the expression:

There are the quick and the dead. Rousey (11-0 MMA, 5-0 UFC), 28, finished her opponent even faster than in her previous title defense, a 16-second railroading of Alexis Davis last July. It was her 11th straight win and ninth via armbar, which she applied as Zingano (9-1 MMA, 2-1 UFC) charged her in the opening seconds of UFC 184’s headliner.

The women’s bantamweight title bout was the main event of the UFC 184 event, and it aired on pay-per-view following prelims on FOX Sports 1 and UFC Fight Pass. UFC President Dana White said the event was expected to generate a live gate of $2.7 million and was trending toward success on pay-per-view.

Zingano, 32, threw a flying knee and then applied a headlock to take Rousey to the mat. But while in motion, the champion reversed position and then scrambled to Zingano’s back. At the same time, Rousey isolated the challenger’s arm, setting up a straight armbar that forced a quick tap from Zingano.

It was the fastest submission in UFC title fight history, beating Frank Shamrock’s 16-second armbar of Kevin Jackson at UFC 15.5.

“We were expecting that she might just come out and just do something flying at me right away,” Rousey said afterward. “I originally thought I was going to check (the punch and throw a) left hook, but I just caught her instead. I was actually working on that armbar, not at that angle, but hey, it works.”

Zinging, who suffered the first loss of her professional career and overcame great personal tragedy to fight for the title, was in shock at the turns of events and struggled to contain her emotions.

Rousey’s dominance inevitably prompted the question of what was next for her career. She has only been past the first round once in five UFC fights and has never been in danger inside the UFC’s octagon.

“Honestly, I was impressed by Holly Holm tonight,” said Rousey, referring to former the former boxing champ’s successful debut in the night’s co-headliner. “I’ve always liked to test myself against that level of striking. Bethe Correia, she’s undefeated — I’d like to take that 0 away from her.”

Correia, 31, has beaten two of of Rousey’s teammates in the UFC and called repeatedly for a shot at the champ. She attended tonight’s event and said backstage prior to the event that she would do whatever it takes to secure a title shot.

With few ready-made contenders left, however, Correia might not need to press too much to get her wish.