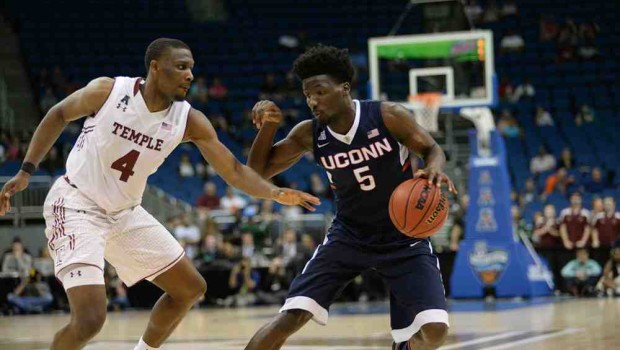 Temple has to hope for the tender mercies of the NCAA tournament selection committee if it’s going to reach the Big Dance.

Daniel Hamilton and Shonn Miller scored 19 points apiece and Connecticut shrugged off a slow start to beat top-seeded Temple 77-62 in the semifinals of the American Athletic Conference Tournament.

Showing no signs of fatigue after needing four overtimes to win the longest game in league history in the quarterfinals, the Huskies built a 16-point first-half lead and weathered a couple of Temple surges before pulling away for good down the stretch.

Jalen Adams, whose shot from beyond mid-court forced a fourth OT against Cincinnati on Friday, had 11 points as fifth-seeded UConn (23-10) advanced to Sunday’s tournament final.

Jaylen Bond led Temple (21-11) with 17 points and 10 rebounds. The conference regular-season champions were just under 36 percent from field, missed 10 free throws and finished 4 of 20 on 3-point attempts.