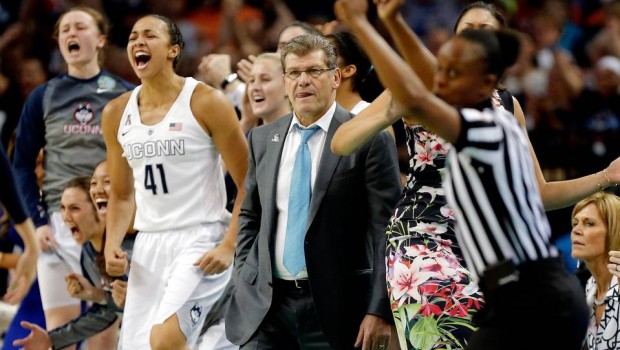 Women’s basketball has come a long way even though it still doesn’t have the luster of the men’s college tournament.

But Connecticut proved again last night that a dynasty is a dynasty, whether the coach is John Wooden or Geno Auriemma.

Kaleena Mosqueda-Lewis and Moriah Jefferson each scored 15 points and UConn beat Notre Dame 63-53 to win the Huskies third straight championship and 10th overall, tying Auriemma with Wooden for the most titles in college basketball.

UConn’s coach has now won all 10 of his trips to the national championship game. The Huskies have won five of the last seven titles.

Breanna Stewart stated when she came to UConn that her goal was to win four championships. The junior is now one title away from being the first to win four straight. Stewart has been a huge reason why the Huskies have been on their won three consecutive titles.

The 6-foot-4 star is the latest in a long line of outstanding UConn players that Auriemma has coached, including Rebecca Lobo, Diana Taurasi, Sue Bird and Maya Moore.