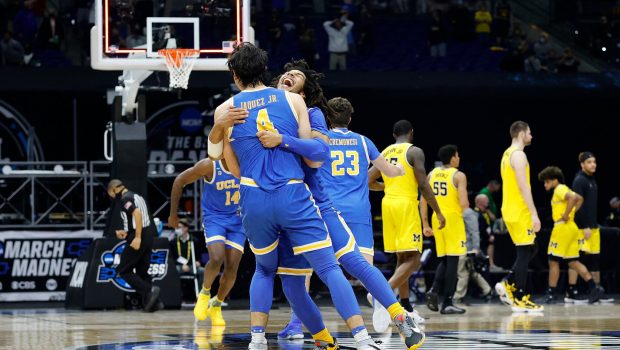 UCLA’S DREAM WILL END VS. GONZAGA, BUT THEY’LL COVER THE 14!

UCLA and Gonzaga are both great stories, and one will end tomorrow night in their Final Four game

Gonzaga opened as a 13 1/2-point favorite, the largest spread in a Final Four game since 1999; that line has since moved to -14 at the majority of sportsbooks. The total of 146 has held steady, though bettors will find the odd 145.5 out there.

Since dropping an 83-79 decision to Oregon State in the Pac-12 Tournament, UCLA has gone on an incredible tear, reeling off five consecutive victories while covering all five – including four wins as an outright underdog. The most recent victory was the most satisfying of all, as the Bruins stunned No. 1 Michigan 51-49 to win the East Region.

Yet while UCLA is just the sixth double-digit seed to reach the Final Four in tournament history, oddsmakers are giving the Bruins the lowest chance to advance of any of them. And knocking off the high-powered Bulldogs will require a virtuoso performance from team scoring leader Johnny Juzang (15.5 ppg), who overcame an ankle injury to rack up 28 points vs the Wolverines.

Even so, there isn’t a team in the country that would be favored to beat a Gonzaga unit that averaged 91.6 points during the season and has poured in 83 or more points in each of its first four NCAA Tournament games. Star forward Drew Timme has been the catalyst as you might expect, having averaged 25 points on 64.4 percent shooting over the past three games.

The Bruins have already beaten a pair of top-two seeds – and while the Bulldogs look unbeatable, 14 points is an awful lot to give to a team playing as well as UCLA is right now.