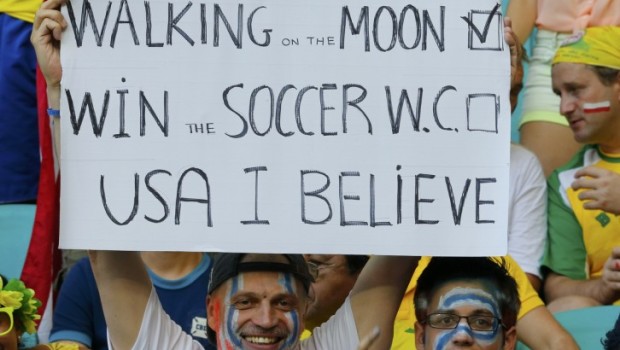 U. S. TEAM SUFFERS THE AGONY OF DA FEET

Kevin De Bruyne turned a heroic night for U.S. goalkeeper Tim Howard into defeat on Tuesday with an extra-time goal and an assist that gave Belgium a 2-1 victory and a quarterfinal match against Lionel Messi and Argentina.

With three extra-time goals total in a thrilling match, De Bruyne and substitute Romelu Lukaku gave Belgium a comfortable lead before Julian Green closed the gap with 12 minutes to go and made for a nervy ending.

“For my heart, please don’t give me too many games like this,” said Belgium coach Marc Wilmots, who now must get his team ready to face Argentina in Brasilia on Saturday.

Belgium’s unyielding attacks for 90 minutes on Tuesday only highlighted the great performance of the 35-year-old Howard, but the goalkeeper’s teammates finally wilted in the evening heat once extra time came.

“They were all on their limit,” United States coach Jurgen Klinsmann said. “[Howard] had an absolutely amazing match.”

Three minutes into extra time, Lukaku found space on the right and passed into the center. At first, the ball was poked out before De Bruyne gained possession. Belgium’s creative genius still had the energy for a sharp turn, and his low shot finally missed the yellow foot of Howard and settled inside the post.

Realizing he had finally been beaten, Howard fell back on the grass almost in slow motion, arms and legs outstretched and eyes staring up into the darkness over the Arena Fonte Nova. The man of the match turned out to be on the losing side.

“The levee is going to break at some point,” Howard said.

In the 105th minute, Belgium looked like they had put the game away. De Bruyne launched Lukaku into open space on the left, and the Everton striker beat his club teammate with a drive to the near post.

It wasn’t over on a sticky, anxiety-ridden night, however. The Americans got late hope when Green pulled one back in the 107th minute with a sterling volley on the turn that Thibaut Courtois could only touch before he saw it fly into his net.

Suddenly, Klinsmann started wildly shouting, “Come on, come on,” and flailing his arms, and there was a new team on the field.

“It was a game that just went to the extreme,” Klinsmann said.

Now it was Belgium’s turn to be caught flat-footed.

With six minutes to go, the Americans almost got the equalizer. A free-kick move set Clint Dempsey free in the center with only Courtois to beat. But the Belgium keeper proved he is one of the world’s best by spreading his giant body to smother the shot.

“The second extra time was a total turnaround. Suddenly, they had all the energy,” De Bruyne said.

With almost no work in 120 minutes, Courtois turned out to be more decisive than Howard had been.

With waves of chants of “USA, USA” echoing around the 48,000-seat stadium, the reinvigorated Americans kept searching for a late goal right up until the final whistle.

Belgium had been criticized for their low scoring rate at the World Cup but it was not for want of trying on Tuesday. The team had 27 shots on Howard, compared to nine for the United States.

Amazingly, in the most lopsided knockout game so far, victory came preciously close for the Americans with seconds to go in regulation time when a goalmouth scramble brought the ball to Chris Wondolowski, who skied the ball over from outside the 6-yard box.

It always was going to be a physical battle between the two teams, but Belgium was the only one adding creative touches, underscoring their individual class.

When U.S. President Barack Obama started watching the game in the second half, all he could see was increasing one-way traffic facing his team. Divock Origi hit the bar with a header in the second half, two players totally missed the ball for what would have been a tap-in goal and Howard swatted away ever more balls.