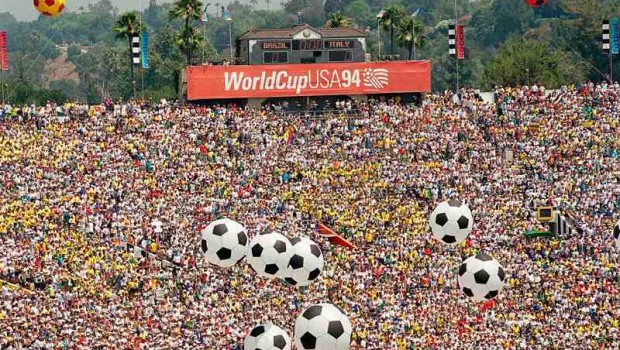 Though soccer’s popularity has climbed steadily over the last two decades, the interest in this World Cup is unprecedented. The three group games are the three most-viewed men’s World Cup games on ESPN or ESPN2.

The U.S.-Portugal game last Sunday night alone drew 24.7 million viewers on ESPN and Univision, making it the most-watched soccer game shown in the U.S. The 18.2 million who watched just on ESPN were enough to top the previous record, set for the 1999 Women’s World Cup final between the U.S. and China.

The peak audience of 22.9 million made it ESPN’s most-watched sporting event outside of the NFL or college football.

Even with Thursday’s game against Germany falling in the middle of the workday, almost 11 million people tuned in to the ESPN telecast and another 3.4 million watched on Univision. And that doesn’t account for the thousands of people who watched at bars, their offices and the outdoor screens that were set up in parks and plazas.

Americans bought 200,000 tickets to the World Cup, second only to host Brazil. And Twitter says more than 300 million World Cup-related Tweets have already been sent, already making it one of the most Tweeted about events.

And the 1994 tournament was the foundation for all of it.

“I think 1994 was a huge turning point for everybody in soccer. The way people looked at it in the U.S., and the way it was looked at around the rest of the world,” said Marcelo Balboa, another defender on the ’94 squad.

Prior to that World Cup, soccer was considered a niche sport, at best, popular with immigrants and grade schoolers.

Oh, the North American Soccer League had sparked some interest in the late 1970s with Pele and Franz Beckenbauer, but the league folded less than a decade later. Not even the World Cup could be counted on to provide a cyclical surge in popularity because the U.S. men would go 40 years without qualifying after playing in the 1950 tournament.

But organizers of the 1994 World Cup were convinced that if Americans saw first-hand the spectacle of soccer and the passion it generated, they, too, would be hooked.

“America loves big events. We did everything in our power to make sure the public viewed it as a really big event,” said Alan Rothenberg, who was president of the U.S. Soccer Federation at the time and oversaw the World Cup. “So it gained momentum that way.”

Organizers targeted companies looking to expand to Europe for sponsorships. They quietly sold the first tickets to ethnic groups and amateur players and coaches, allowing them to boast that the initial blocks were sold out when tickets went on sale to the general public.

“That sort of helped create the notion that it was a hot-ticket item,” Rothenberg said.

The games, most of which were played at NFL stadiums, were sold out before the tournament began. The 1994 World Cup still holds the record — 3.57 million fans — for attendance.

“A World Cup in the U.S. didn’t have concerns about infrastructure, it was will anyone come?” said U.S. Soccer president Sunil Gulati, who was part of both the bid and organizing committees for 1994. “That question certainly got answered.”

And once the games began, the soccer sold itself.

It didn’t hurt that the Americans played better than anyone expected, upsetting powerhouse Colombia to advance out of the group stage. By the time the U.S. played Brazil on July 4 at Stanford Stadium, the U.S. had full-blown soccer fever.

Rothenberg remembers driving to the stadium and getting stopped a mile away because the streets were filled with U.S. fans, cheering and chanting, their faces painted red, white and blue.

“That was just really exciting,” Rothenberg said. “Because it was clear Americans had gotten caught up in this.”

And 20 years later, the U.S. team is filled with players who trace their interest in soccer or first memory of the game to that 1994 World Cup.

“I’m not sure we appreciated fully the impact it was having,” Lalas said. “We knew it could be influential and could be long-lasting. But the further and further we get away from it, the more it consistently comes up and resonates.”