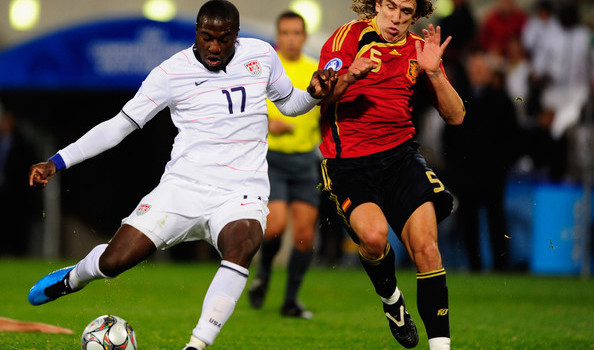 U. S. HOPES REST ON ALTIDORE AND DEMPSEY

Forget about the shock decision to ditch Landon Donovan or the move to bring 17 rookies to Brazil. The United States’ biggest World Cup gamble actually revolves around two of its biggest stars.

Head coach Jurgen Klinsmann has gone “all in” on frontline duo Jozy Altidore (left in above photo) and Clint Dempsey and how things fare for the national team in South America may hinge on the performances of that tandem.

Both Altidore and Dempsey are seen as vital to the core of the squad, but each have had some recent issues regarding fitness, form and confidence. Nevertheless, Klinsmann will live or die by the pairing of the powerhouse forward and the ultra-competitive team captain, and he has no plans to change his mind.

Altidore managed just one goal in the English Premier League with Sunderland last season, while Dempsey missed the first friendly of the U.S.’ World Cup send-off series against Azerbaijan before returning against Turkey on Sunday with a strong performance. Dempsey has found his form this season with the Seattle Sounders after returning to Major League Soccer and struggling at the back end of 2013.

Yet Klinsmann is not holding anything back. Instead of switching out the attack in last Sunday’s 2-1 win over Turkey to introduce reserve forwards Aron Johannson or Chris Wondolowski, he opted to give Altidore and Dempsey the full 90 minutes, a move he may replicate against Nigeria in Jacksonville on Saturday.

“Clint and Jozy need to really fine tune. That is why I left them out there for 90 minutes,” Klinsmann said. “They need to really read each other blindly and that comes only with time. Purposely I planned that. These two are dangerous and big-time players and hopefully making the difference for us this summer.”

Klinsmann’s risk is not in playing Dempsey and Altidore together – that is the sensible option – but given their respective issues, a more cautious coach might have given Johansson a start against Turkey and brought on Altidore, for say, a half. Similarly, Dempsey could have been taken off with 20 minutes left to guard against a flare-up of the groin tightness he suffered last week. Klinsmann knows that playing time, and hopefully goals, is the only way to get the pair into the kind of World Cup form he wants before the team takes on Ghana on June 16.

While Dempsey knocked in U.S.’s second goal against Turkey, Altidore continued his scoring drought, which remains the big elephant in the room. Except that, you know, people actually aretalking about it.

“Everyone is so worried about my confidence. Unbelievable,” Altidore snapped at a journalist on Sunday after a solid display that produced everything. “My confidence is fine, my man. It is not going to change whether I score a hat trick or I don’t score. I’m fine.”

However, as a former world-class forward, Klinsmann knows the quirks associated with playing the position and how a breakthrough goal to end a slump can often lead to a scoring streak.

“With Jozy, what we all wish is that he will score in the net,” Klinsmann added. “This opportunity, we wait for it. I wouldn’t mind if the goal comes against Ghana right away. People kind of sooner or later break through with goals. You have got to work for it.

“You have got to stay hungry and grind it out and sooner or later it is time and, boom, the ball is in the net.”

Some believe scoring goals will be the Americans’ biggest challenge in Brazil. Those doubts over whether the U.S. has the requisite offensive firepower will persist until Jozy Altidore and Clint Dempsey develop the necessary chemistry.