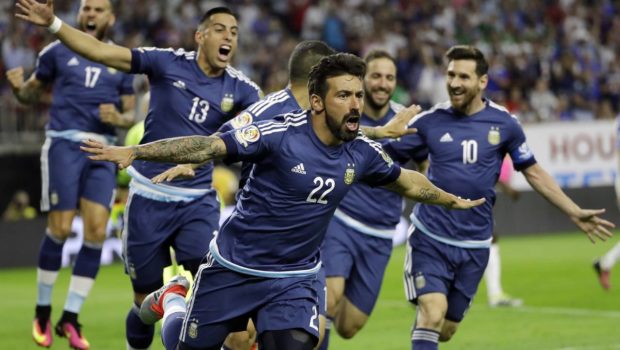 For the U.S. men to have a chance, they were going to have to catch the all-Universe Lionel Messi and Argentina on an off night, something that seemed almost possible given that Argentina came into the game on just two days of rest.

It didn’t happen. Argentina was plenty good, and Messi was even better, dizzying the U.S. midfield and defense as he dribbled through player after player with the ball seemingly tied to his foot. In the third minute, Messi sent a perfect chip into the penalty area that Ezequiel Lavezzi (above) headed in to give the world’s top-ranked team the early lead.

“We knew it was going to be a hard game before the whistle blew, and then you go down a goal to the best team in the world,” goalkeeper Brad Guzan said.

A half-hour later, Messi drew a foul from a desperate Chris Wondolowski as he streaked across the middle of the field 30 yards from the goal. Messi pushed himself off the grass, retied his cleats and curled the free kick over goalkeeper Brad Guzan’s fingertips into an unblockable, upper-left corner of the goal.

“You wish you could take it back,” Wondolowski said. “He was on the break and I was just trying to get some of the ball.”

Five minutes into the second half, Gonzalo Higuaín put the game away, running through two U.S. defenders and poking the ball past Guzan. Then Higuaín did it again, off another stolen ball and assist from Messi in the 86th minute.

After solving three straight quality opponents with a taut defense and a speedy counterattack that produced seven goals, the U.S. struggled to create much on offense. The Americans barely managed a shot for the entire game. A few crosses from Gyasi Zardes and DeAndre Yedlin that found Argentine defenders instead of American attackers were as good as it got.

The U.S. played without three valuable starters, as midfielders Jermaine Jones and Alejandro Bedoya and striker Bobby Wood served one-game suspensions. It’s doubtful they would have made much of a difference.

“We let them dictate the pace of the game, and we weren’t physical enough,” said defender Geoff Cameron. “We didn’t put our best foot forward tonight.”

Argentina moves on to the final Sunday in New Jersey, where it will face the winner of Wednesday night’s match between Colombia and Chile, which beat Argentina in last year’s Copa America final on penalties. Argentina hasn’t won a major international tournament since 1993. The end of that dry spell appears to be just days away.

For the Americans, it’s on to the third-place game in Arizona, which isn’t where they wanted to go, and getting farther than most thought they would was little consolation.

“It’s still a big disappointment,” said midfielder Michael Bradley. “Nobody has the mentality that just because you get to the semifinal you are playing with house money. The idea was to take it another step further.”