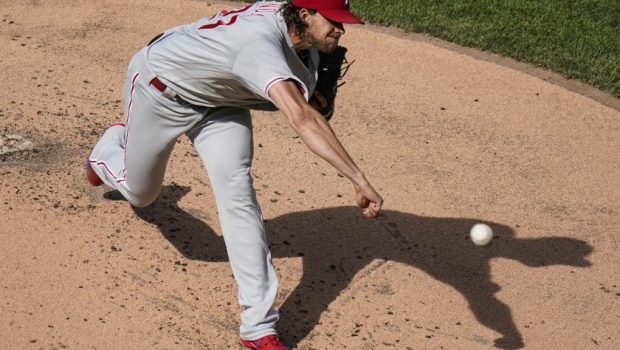 In many ways, last night’s split of a doubleheader with the Mets in New York was a poster for their season.

They blew an absolute gem by Aaron Nola and lost the opener and overcame their woeful bullpen to win the second.

Odubel Herrera’s run-scoring groundout in the eighth inning lifted them to a 2-1 win in the nightcap, salvaging a split of the twinbill for the Phillies, who won for just the third time in 10 games. The Mets have lost seven of 11.

The rally by the Mets cost Phillies starter Nola a victory despite his history-making performance. Nola struck out 10 straight batters between the first and fourth, tying the big league record set across the street at Shea Stadium on Apr. 22, 1970 by Mets Hall of Famer Tom Seaver, who struck out the final 10 batters he faced in a 2-1 win over the San Diego Padres.

Nola also had two hits, including an RBI double in the fifth.

In the nightcap, Bryce Harper homered to break a scoreless tie in the sixth before the Mets mounted another rally in the seventh against Archie Bradley (3-1). Billy McKinney delivered a pinch-hit leadoff single before Luis Guillorme, who reached on an error by Jose Alvarado and scored the tying run in the seventh inning of the opener, followed with a grounder to third, which Alec Bohm misplayed.

Michael Conforto drew a five-pitch walk to load the bases before Bradley struck out Patrick Mazeika. James McCann followed with a sacrifice fly to the warning track in centerfield.

In the top of the eighth, Brad Miller’s leadoff groundout against Sean Reid-Foley (2-1) sent automatic runner Rafael Marchan to third. Herrera followed with a sharp grounder to third. Drawn-in Guillorme gloved it but dropped it as he tried to whirl for home and had to settle for the out at first.

Hector Neris threw a perfect bottom of the eighth for his 11th save.

Prior to the Mets’ second rally, Matt Moore was in line for his first big league win since Aug. 19, 2018. Moore allowed three hits and one walk while striking out two over five innings.

Mets starter David Peterson allowed the one run on three hits and two walks while striking out five over six innings.