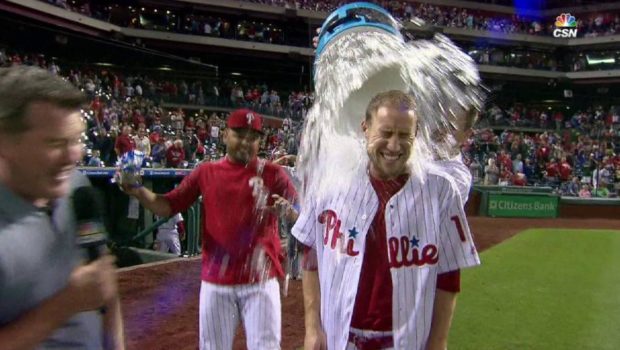 Ty Kelly singled home the winning run with two outs in the 11th inning to lift the Phils to a 4-3 comeback victory over the Atlanta Braves.

“That was fun,” Phillies manager Pete Mackanin said. “A tiebreaker by Ty Kelly. I had to use that.”

Odubel Herrera hit a tying home run with one out in the ninth off Braves closer Jim Johnson, who blew his eighth save. Herrera finished with three hits and two RBIs.

The Phillies loaded the bases in the 11th against Rex Brothers (1-1), and Kelly lined the second pitch into left-center to score Tommy Joseph from third.

“I was just trying to win the game,” Kelly said. I thought about bunting because (Freddie) Freeman was back (at third) and I changed my mind. It’s really nice to capitalize.”

“The bullpen did a great job,” Mackanin said.

Atlanta’s Nick Markakis had three hits with two doubles to move within five hits of 2,000 for his career. The Braves have lost six of seven.

The Braves jumped out to a 2-0 lead in the first thanks in part to Cesar Hernandez’s throwing error at second base. Matt Adams’ sacrifice fly and Markakis’ double scored the runs. Both were unearned after Hernandez’s throw went high over shortstop Freddy Galvis, allowing Phillips to reach second safely.

Atlanta starter Sean Newcomb didn’t allow a hit until Herrera’s two-out RBI single in the fourth that brought the Phillies to 2-1.

The Braves went back up two runs in the fifth on Tyler Flowers’ sacrifice fly to center with the bases loaded.

The Phillies got a run back in the eighth on Aaron Altherr’s RBI single that scored Hernandez. But Arodys Vizcaino struck out Nick Williams before Freeman’s excellent grab of Joseph’s liner to third that turned into a 5-4-3, inning-ending double play.

Herrera then sent the game to extra innings with a solo shot to right in the ninth off Johnson.