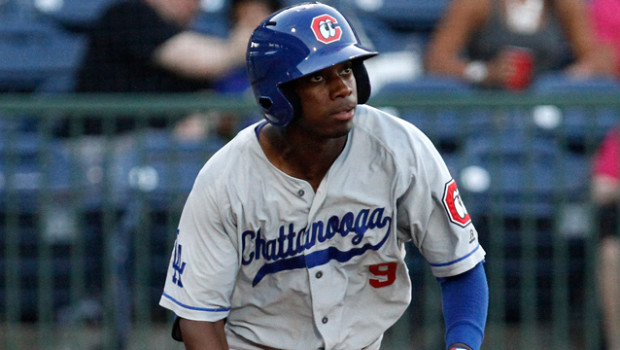 HERE ARE THE TWO GUYS PHILLIES GET FOR LEGENDARY CHASE UTLEY!

So, who exactly are the Phillies getting in return for legendary Chase Utley?

Sweeney, 24, has hit .271 with nine home runs, 49 RBI and 32 stolen bases at Oklahoma City this season and was named to the Triple-A All-Star Game. Sweeney has played second base, center field and even some third base and left field for the OKC Dodgers.

The Dodgers will receive $4 million from the Phillies, covering the cost of a buyout that will make Utley a free agent after this season. The Dodgers will assume approximately $2 million in salary – pushing their total payroll commitments for the season over $300 million.

Utley will become the Dodgers’ everyday second baseman while the team waits for Howie Kendrick to return from a strained left hamstring. Kendrick has been on the DL since Aug.9. No timetable has been given for his return, but mid-September is an optimistic estimate.

The Dodgers also believe Utley can play first base and possibly third base once Kendrick returns.

Kiké Hernandez has been the primary replacement for Kendrick and has played well. He has a six-game hitting streak after hitting a double in Wednesday’s game, with 15 hits in his past 39 at-bats. Hernandez has reached base in his past 14 games.

The Dodgers still want Hernandez to be in the lineup on a regular basis. But adding Utley will allow Hernandez to be used in a multi-position role once again – with an emphasis on center field. Rookie Joc Pederson’s offensive contributions have all but disintegrated. He has hit .161 since June 23 with just five hits (and 22 strikeouts) in his past 51 at-bats. The Dodgers view Hernandez as the best alternative to replace Pederson at times.

Utley, however, represents the kind of gamble the Dodgers’ new front office has avoided for the most part and Colletti seemed fond of (picture Michael Young) – a high-mileage veteran with his best days behind him. Utley’s former teammate, Rollins, was that type of gamble and has come to life in the second half.

A career .282 hitter with an .847 OPS in 13 big-league seasons, Utley is batting .217 this season. But he is 15 for 31 with a home run and five doubles in eight games since returning from an ankle injury that kept him out for six weeks (and prevented the Phillies from trading him sooner).

“He does have experience,” Rollins said. “He’s a tough guy. He brings that with him.

“More than anything there will be some new excitement in this clubhouse. He has a chance to play some meaningful baseball late in the year again. That’s what we all want.”