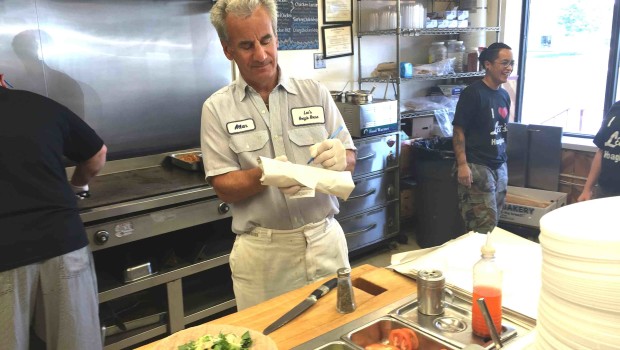 Allan Lewin (above) is spearheading Lee’s Hoagie House Franchise Group’s expansion into the Wells Fargo Center this fall and to other Philly region locations, with the rest of the USA to conquer!

When Allan Lewin was a Temple student back in the 1970s he thought seriously about going to law school.

Then he got mugged at Broad and Susquehanna Sts., right in the heart of the Temple campus.

So he had a sober second thought, and decided to follow his dream of a career.

If more wannabe attorneys had done that, Philly would have far fewer phony lawsuits and many more fulfilled dreams.

Lewin has fulfilled his dream of working and managing in the food business, and in so doing he has also fulfilled the gastronomic dreams of hundreds of thousands of Philly hoagie, cheese steak — and Eagles fans!

Especially on Sundays during the NFL regular season. It is a hot and steamy early August afternoon, and Lewin is on the phone at Lee’s Hoagie House on Second Street Pike in Southampton.

No depositions to take, arguments to make and outrage to fake.

He has been doing this since he walked into the original Lee’s at 19th and Cheltenham in 1977 to learn a business that has provided for him and his family ever since.

Lewin and his happily efficient crew at the Southampton Lee’s are busily filling the orders that have been the lifeblood of the fast food business in Philly since the original Lee’s opened in 1953.

Lewin grew up in the northeast, went to Lincoln High and has always had a work ethic.

“As a young kid delivering newspapers I would go into what was then Barson’s, now Casino Deli, and ask them to convert my loose change into dollar bills,” Lewin told the Uptight Suburbanite a few years ago, referencing a couple of iconic eateries in the northeast.

“Every time I went I would ask the owner, Manny Rosen, for a job. First he said I was too young, then he said whatever….. there was always another reason not to give me a job. Finally, I asked this one time when he was short help and he said, ‘Kid, if you come back in one hour with a clean, pressed, white shirt you’ve got a job.’

“The die was cast. I showed up in one hour and got the job. I started out as a busboy and remained at Barson’s for 4 years. My experiences there turned out to be among the most influential
of my life.”

That led him to Lee’s in Cheltenham, where he befriended all the famous hoagie and cheese steak makers — Kay and Jimmy, but especially the proprietor, Seymour Lestz. And as fate would have it, Lee’s would have a thread in his personal life. As Lewis told the Uptight Suburbanite:

“I went to Israel with a B’nai Brith and met Meryl. Even though people didn’t think we were a ‘match’, we were and continued dating. Meryl’s grandfather was the original ‘Lee,’ Lee Seitchek. Her mother and father picked up the mantle. Anyway, I really liked the food business and the variety of tasks it offered. I liked the interaction with people so a desk job or law school was no longer appealing. Lee’s offered me a job.”

And the rest is Philly hoagie and cheese steak history — and by the way, Meryl and Allan got married, had a couple of kids and are living in Dresher.

He worked in the Bensalem shop, then managed the Abington location before opening the Southampton shop in 1983, where Lewin has been ever since. Lewin is also CEO of Lee’s Hoagie House Franchise Group LLC, and with his partners vice president Jon Waxman (who also owns the Abington and Horsham locations) and president John Connell (who owns the Castor Ave. shop and whose wife Robin operates in Stone Harbor) are almost two years into the effort to take the Lee’s name national:

“Our product I believe is superior to everybody else’s.

“In December 2013, we started putting the pieces together to start franchising,” Lewis says during a break in the afternoon rush in Southampton. “We were committed to becoming something decent in terms of a company or to get off the pot.”

That includes striking a deal to open a couple of Lee’s Hoagies stands at the Wells Fargo Center this fall, which will expose Lee’s product to basketball, hockey and concert fans — not to mention attendees of next July’s Democratic National Convention.

“We have very strict standards for our franchisees,” says Lewin, who already has 15 franchise locations in the Philly area with more on the way.

“We’re talking about the Main Line, King of Prussia area, and some in the city. You need about 1,500 square feet with seating for about 15-to-20 people.”

So, how do Lewin and his partners maintain quality control, that bugaboo of any franchisor?

“Hoagie University,” Lewin answers proudly. “”Jon Waxman is in charge of training, and we offer ongoing support and training manuels.

Plus, there are the surprise visits to ensure the quality of the product.

“Qualified franchisees are hard to find. Those that want to do it can’t afford it, and sometime those that can afford it don’t want to do the work.

“But good operators that do qualify and open a Lee’s franchise can do a 20 percent margin.” Lewin is glad he eschewed the law for the food business!

Lewin won’t be hard to find on Eagles Sundays this September through next January and, it is hoped, next February, which would mean the Super Bowl.

“I get in around 8 in the morning,” he says, “and we get our first customers by around 8:30. Typically those are the people going to the game who are going to tailgate.

“For a 1 p.m. game, we get a steady stream of customers through about noon. Those are the people who are watching at home or at parties. And then we get another crowd in at halftime around 2:30.

And on Monday morning what used to be hashed over at the water cooler now gets discussed over a Lee’s Cheltenham hoagie or a Supreme cheese steak.

“You can’t believe the way our staff gets into the conversation about the Eagles on Mondays,” Lewin says. “It’s the beauty of Lee’s.”

Just then, on this early August Monday afternoon, the head honcho behind the counter shouts out:

“Hey you’re a sports expert. How do you think the Birds will do this year?”

“Oh man,” he counters, “you have really drunk the Kool-Aid!”

It’s much more fun to argue about Sam Bradford and DeMarco Murray than it is to debate a moot point before a judge and jury.

You’ll get no argument from Allan Lewin!