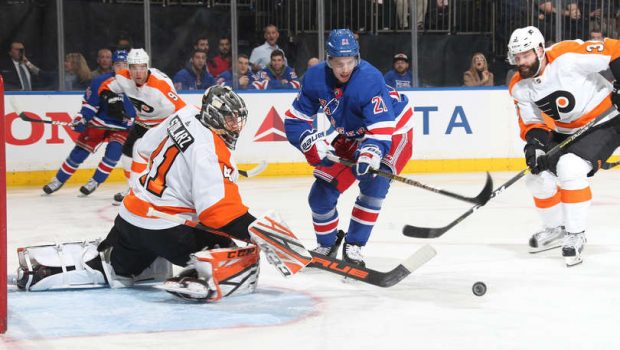 TURNAROUND KING FLYERS BEAT RANGERS FOR 5TH IN A ROW!

What’s gotten into the Flyers?

For the first half of the NHL season they were one of the worst teams in the league.

“It’s good to get the win,” the 25-year-old said. “For me to come out there and kind of just hold the fort down for the team, and they did a great job, too. I remember looking up at all the blocked shots. … A credit to the boys in front of me.”

Stolarz, who missed last season rehabbing from knee surgeries, was making his eighth start this season and the 12th of his career.

“It felt great coming back,” he said. “If I wasn’t ready I wouldn’t be back. … Points are at a premium now, so we are going to want to go in every night, and we’re going to have to play like it’s a playoff game if we want to get back into (the race).”

The Flyers, who have won six of seven overall, have outscored opponents 20-10 during their winning streak. Philadelphia was coming off a 3-1 win at home over Winnipeg on Monday night in its first game back after an extended break for its bye and the All-Star Game.

With the two wins in two days, the Flyers have pulled 10 points behind Pittsburgh for the last playoff spot in the Eastern Conference. However, coach Scott Gordon doesn’t want his team looking too far ahead,

Alexandar Georgiev finished with 18 saves — including all seven Philadelphia shots he faced over the final two periods. New York, playing for the first time in 10 days, had won three straight.

The Rangers pulled Georgiev for an extra skater with just under two minutes remaining, but couldn’t beat Stolarz.

“It’s frustrating, obviously, when the game ends and you don’t get a goal,” New York coach David Quinn said. “There were opportunities and you have to capitalize on your chances and we didn’t do that today.”

“One of his strengths (is) to get across laterally,” Gordon said. “With his size he’s getting there before a lot of goalies. … It was a tough challenge for our team (tonight) and it was a lot easier because of the effort (Stolarz) gave us.”

Filip Chytil hit a goalpost from between the circles about eight minutes into the third, keeping the Rangers off the scoreboard. Stolarz then made a sprawling save in front on Brendan Smith’s shot that deflected off a Flyers player with about two minutes to go.

The Rangers went on their second power play of the game with just under eight minutes remaining in the period and had several good chances. Stolarz stopped a deflection by Chris Kreider from the right side, then denied Kevin Hayes and Kreider on successive tries in front 30 seconds later.

The goalie also made a save on Vladislav Namestnikov’s backhand in front with 6:09 remaining, then made a sensational smothering save on Kreider seconds later.

Kreider also hit a post from the left side with about 4 1/2 minutes remaining in the second.

Philadelphia got on the board when Lindblom followed a flurry in front and backhanded a loose puck high for his sixth goal 1:40 into the game.

“I was trying to find the puck in front of the net,” Lindblom said. “It was a nice goal to get.”