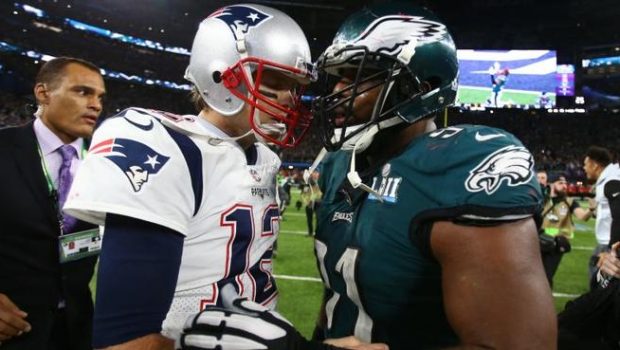 TURNAROUND ARTISTS EAGLES CAN CEMENT THEIR SEASON ON SUNDAY!

And a win on Sunday against the Pats will cement that effort.

After falling below .500 at 3-4 after an ugly loss at Dallas, the Eagles have responded with wins over the Buffalo Bills on the road and at home against the Chicago Bears.

As a result, the Eagles have pulled into a tie for first place with the Cowboys in the NFC East.

The Eagles added wide receiver Jordan Matthews this week for his third stint with the franchise since deep threat DeSean Jackson was placed on injured reserve after undergoing abdominal surgery. The offense has been inconsistent, as evidenced by rolling up a 19-0 lead over the Bears before struggling the rest of the way in a 22-14 victory.

“Obviously he’s (Jackson) unique, so it isn’t going to be just one guy that does that,” Eagles offensive coordinator Mike Groh said. “We have plenty of good players that are out there in the huddle with (quarterback) Carson (Wentz) and we have to find ways to create those explosive plays that you talk about, get guys open, and help them get open and then make the plays when the plays are there to be made.”

But outside of tight end Zach Ertz (46 receptions, tied for fourth in NFL among tight ends), Wentz has been unable to move the ball downfield with his wide receiving corps consisting mostly of Nelson Agholor, Alshon Jeffery and Mack Hollins. Agholor and Jeffery have continued to drop passes throughout the first nine games.

“The ball is going to find the open guy,” he said matter-of-factly.

Pederson confirmed that left tackle Jason Peters had recent arthroscopic surgery on his knee, but was at practice on Wednesday.

For the first time this season, the defending Super Bowl champion Patriots will be entering a game following a loss, 37-20 on the road against the Baltimore Ravens.

Actually, that loss snapped a 13-game winning streak, which had included three playoff games during the team’s Super Bowl run a season ago.

New England was uncharacteristically sloppy against the Ravens with two costly turnovers, including a rare interception by quarterback Tom Brady. But the Patriots still stayed close late in the game until two fourth-quarter touchdowns by Baltimore.

“Hopefully, it will be a great second half of the season,” said Brady, who has 14 touchdowns and five interceptions this season. “But it’s really up to us to earn it, the people that are in the locker room. We’ve got to show up to work every day with a great sense of determination, commitment to doing our best for each other and for the team. We’ll try to go get a win and it starts this week in Philly.”

The Patriots’ defense has 32 sacks this season (fourth in NFL), and putting pressure on Wentz will be paramount if New England is able to start a new winning streak with a road win in a difficult environment.

Conversely, the Patriots realize the importance of putting points up early and often.