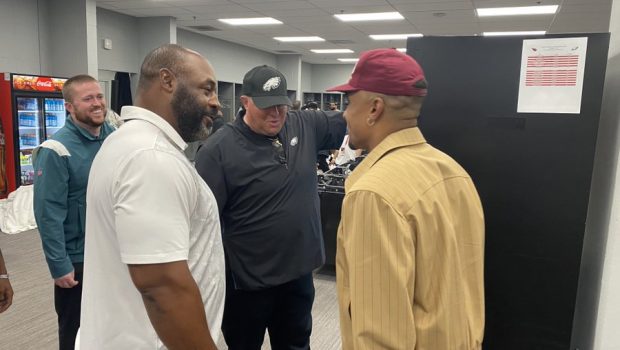 TURD IN THE PUNCH BOWL MCNABB: 5-0 EAGLES STILL A YEAR AWAY!

Former Eagles quarterback Donovan McNabb loves to be the turd in the punch bowl.

Last week on the 94WIP Jon Marks & Ike Reese show, he said the Eagles are a “year or two away.”

And this week he has doubled down:

“It seems that anytime I say anything it becomes a lightning rod and that’s something that’s always been, I guess, my M.O. Hey, I just speak the truth,” McNabb said Monday on WIP.

“I speak with what I see. I still think we’re a year or two away and I think even with this 5-0 appearance right—and Ike has brought it up. It wasn’t a pretty game and there’s a lot to clean up. We’re finding ways to win and that’s most important. Until we change things around and it becomes dominant performances, it’s hard to say right now Super Bowl team.

“But again, I could be wrong and I hope I’m wrong. But I just think we’re a couple more pieces away as we’re adding to the youth of this football team to continue to get to that dominant level, where we go into games and we’re walking out of games at 35-7. Or we’re walking out of that game it’s 42-14. I like what I’m seeing from this football team. And you can honestly say that I didn’t say anything wrong and that’s why I’ve become a topic of conversation on these shows.”