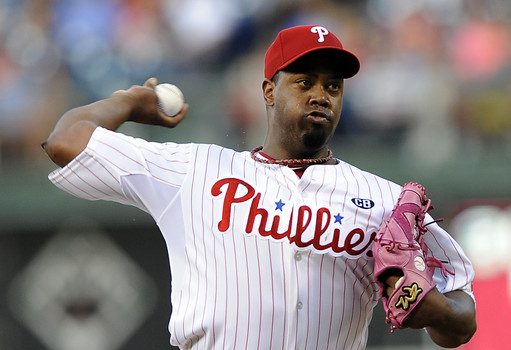 So this is what the results of a trade are like.

Troy Tulowitzki homered and had three hits in his Toronto Blue Jays debut as Toronto beat the Phillies 8-2 on Wednesday night.

The five-time All-Star, who was acquired in a trade with the Colorado Rockies on Tuesday, went 3 for 5 with two doubles and three RBIs. He scored three times.

R.A. Dickey (5-10) allowed two runs, none earned, and seven hits in eight innings to win consecutive starts for the first time this season.

The Blue Jays snapped The Phils’ winning streak at five games and handed them ust their second loss in 11 games since the All-Star break. Toronto has won nine of the past 10 meetings with Philly.

Tulowitzki was cheered when he came out for pregame stretching and got a standing ovation before his first at-bat, stepping out briefly to let the noise subside. After working the count to 2-2, he struck out swinging on a breaking ball.

Starting in the leadoff spot for the first time in his career, Tulowitzki connected for a two-run home run off Jerome Williams (above) in the third inning. The second-deck blast, Tulowitzki’s 13th, came on an 0-2 pitch and snapped an 0-for-21 slump.

Tulowitzki doubled and scored in the fifth, then hit an RBI double in the sixth before coming home on Chris Colabello’s sacrifice fly.

Of Tulowitzki’s five career hits at Rogers Centre, three have been home runs.

The two-time Gold Glove winner showed off his defense, making a strong throw from the hole to retire Andres Blanco at second in the third.

Toronto designated left-hander Felix Doubront for assignment to clear a roster spot for Tulowitzki. Doubront was 1-1 with a 4.76 ERA in five games.