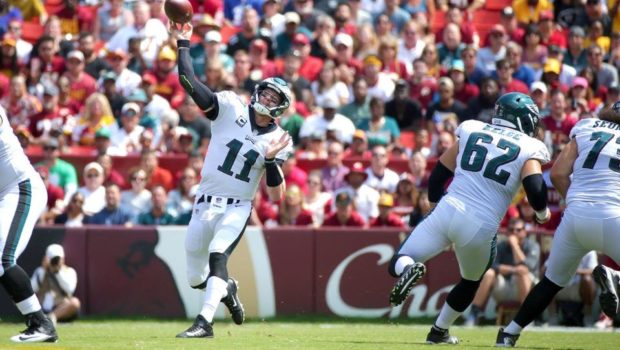 TRUST THE PROGRESSIONS! HERE’S WHY EAGLES’ CARSON WENTZ IS AN IMPROVED QB!

Three weeks into Wentz’s sophomore season, the Eagles sit on a 2-1 record after having beaten two divisional rivals in the Redskins and Giants. While there are other important factors, the development of Wentz is by far the Eagles’ most important going forward. He is currently ninth in the league in passing yards per game average and is fourth in number of passes attempted. Until last weekend against the Giants, the Eagles had relied heavily on Wentz to carry the offense and a lackluster run game.

One of the biggest things Wentz has improved upon is his ability to work through his progressions. Last year, he had a tendency to lock onto his first read and would miss open receivers elsewhere. This year, however, he’s been much better at coming off his initial read when it isn’t there and working through the rest of his reads: