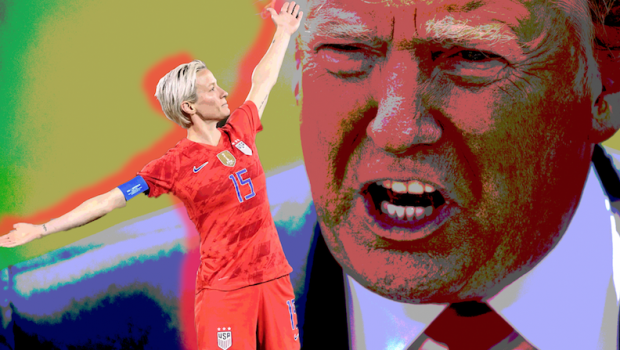 With Spain in the rear-view mirror and France on the horizon on Friday, most American sports fans and others who are paying attention are all on board as the U.S. women’s national soccer team continues its quest to win its fourth World Cup.

Most, but not all. There’s one fellow in particular who is sounding rather grumpy about the red, white and blue.

Donald Trump unleashed a rambling tweetstorm against co-captain Megan Rapinoe yesterday just two days after he was asked in an interview with The Hill political website if her choice to stand at attention with her hands clasped behind her and not sing the national anthem during the World Cup is appropriate.

Wait. What? That’s not appropriate anymore? I was always taught that was a perfect way to honor the flag, the anthem and the country. I wasn’t a good singer, but I certainly knew how to stand ramrod straight and be silent. Apparently, we have all new rules now, people.