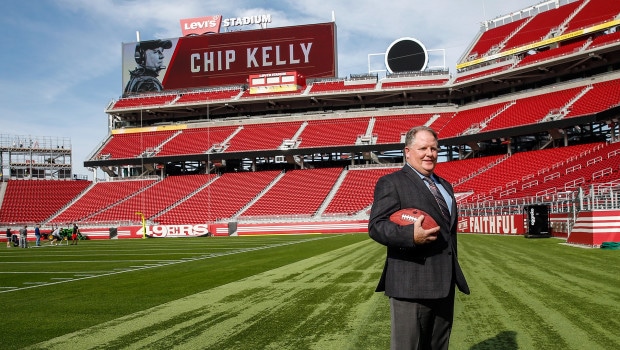 This can hardly be classified as news:

According to NFL Network’s Brian Baldinger, it appears that Kelly and Baalke are having issues.

“I already hear there’s problems in the building between Chip and Baalke,” Baldinger told 97.5-FM the Fanatic.

Although it’s possible that Baldinger is overstating the relationship between coach Kelly and Baalke, it’s certainly believable that the two are having problems. For one, they both were recently in situations where they didn’t like the person they were working with.

In Philly, Kelly was stuck working with someone he loathed — general manager Howie Boy Roseman — and hated every minute of it (Roseman is now the executive vice president of the team).

Kelly recently described that relationship at the NFL owners meetings.

“It was a weird situation,” Kelly said of working with Roseman in Philly, via CSN Bay Area. “I didn’t like the direction it was headed. I didn’t think we were on the same page.”

It’s possible that Kelly and Baalke don’t see eye-to-eye on things in San Francisco. For instance, if the two didn’t agree on what the team should do with Colin Kaepernick, that would potentially throw a wrench into the relationship.

Although Kelly had personnel control in Philly, he doesn’t have that power in San Francisco. Baalke is calling the shots, which is the way he likes it. The last time the 49ers general manager had to share power with a coach was when Jim Harbaugh was on San Francisco’s sideline — and we all know how that ended.

Harbaugh has a reputation as being hard to work with, but so does Kelly at times, so it’s not crazy to think there have been a few issues between him and Baalke.

A month ago at the NFL owners meetings, Kelly spoke highly of Baalke.

“I think our personnel department is outstanding,” Kelly said at the NFL owners meetings. “Trent’s got such a good grasp on this league. He’s been in it so long. He’s got a great feel for how to put together a team. Three years ago, San Francisco was on the 5-yard line with a chance to win the Super Bowl. He’s proven he can acquire talent and put talent out on the field. And I’ve known Trent for a long time.”

However, that doesn’t necessarily mean anything. At the NFL combine on Feb. 25, Kelly said he talked to Kaepernick and knew for a fact that the quarterback “wanted to” be in San Francisco. Hours after Kelly made those remarks, Kaepernick revealed that he wanted out.

It’s very possible that Kaepernick’s the biggest problem. If one guy wants to keep him and the other guy wants to get rid of him, that would definitely create some tension.

From a public standpoint, Kelly’s saying all the right things, but that doesn’t mean that things are perfect behind closed doors. If Kelly and Baalke aren’t getting along, that’s bad news for a 49ers team that’s dealing with its third coach in three years.