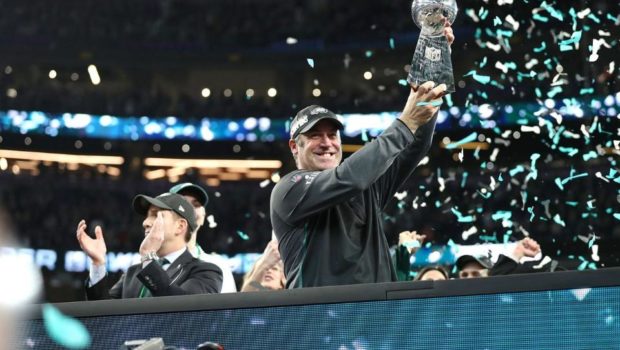 TROPHY TEAM! WHAT EAGLES NEED TO DO TO REPEAT IN 2018!

1. When will Carson Wentz be healthy?

The timing of Wentz’s knee injury wasn’t just problematic for their postseason run (salvaged by the surprising play of backup Nick Foles, who earned Super Bowl MVP honors), but his recovery also will be the Eagles’ main story line of the offseason. Though Wentz has maintained that he expects to be on the field for the Eagles’ opener, it could wind up being close. And the quarterback will miss the entire offseason program and at least be limited during training camp. Even after Wentz’s success in 2017 as a leading MVP candidate until his injury in early December, that is important development as he enters his third year. And there will be plenty of interest in what becomes of Foles, who has one year left on his contract.

2. What will the Eagles do in free agency?

General manager Howie Roseman settled some of the Eagles most pressing free agency questions during the season by signing receiver Alshon Jeffery and defensive tackle Tim Jernigan to extensions. In part because of those moves, the Eagles won’t have much salary cap room to spend on veterans this year, and might need to get creative to re-sign some of their veterans who are slated to hit the market, including outside linebacker Nigel Bradham, cornerback Patrick Robinson and running back LeGarrette Blount.

Long before Wentz suffered his injury, the Eagles lost their star veteran left tackle Jason Peters. He told reporters this week in Minnesota that he wants to continue playing and return for a 14th season, and he is under contract with the Eagles. But the 36-year-old is due a $7.7 million salary in 2018 and carries a cap hit of $11.7 million.

Defensive coordinator Jim Schwartz will be back, but head coach Doug Pederson’s offensive staff could look markedly different, should quarterbacks coach John DeFilippo and running backs coach Duce Staley land promotions elsewhere. Replacing DeFilippo would be a particularly important hire given the impressive work he did in 2017 with Wentz and Foles.

5. Still in control of the NFC East?

The Eagles dominated the NFC East this year en route to the top seed and conference title, but the other teams in the division have made major moves to try to catch up, including the New York Giants’ hiring of Pat Shurmur from the Minnesota Vikings and the Washington Redskins landing quarterback Alex Smith in a trade with the Kansas City Chiefs. With the Dallas Cowboys poised to bounce back in a full season with Ezekiel Elliott, the competition within the division should be fierce: