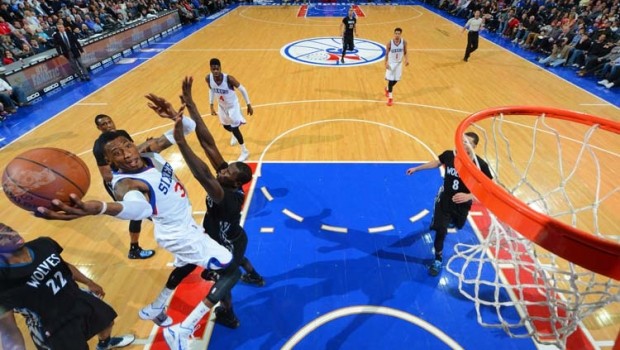 The Sixers saw the Minnesota Timberwolves on their schedule for Jan. 30 at the Wells and their mouths must have watered.

The Wolves, hard as it may be to believe, have an even worse record than the Sixers!

Michael Carter-Williams had a triple-double with 17 points, 10 rebounds and 10 assists to lead the Sixers to a 103-94 victory.

Luc Mbah a Moute had a team-high 18 points, and Nerlens Noel and Robert Covington (photo above) chipped in 14 apiece for the 76ers, who won consecutive games for the third time this season while snapping a streak of 23 straight games without reaching 100 points.

Kevin Martin had 19 points in his second game back after missing 34 due to a fractured right wrist to lead the Timberwolves, who were trying to win consecutive games for the first time this season.

Philly’s 10-1 run to start the fourth quarter, capped by Covington’s 3-pointer from the right baseline with 8 minutes, 20 seconds remaining, put the game away.

Minnesota committed five of its 21 turnovers during the pivotal stretch.

The Timberwolves responded with seven straight points, five of which came from Andrew Wiggins, to pull within 88-85 on Martin’s 17-footer with 6:45 left. But Minnesota wouldn’t get closer the rest of the way in a forgettable fourth quarter in which they shot 7-for-21 while committing nine turnovers.

The loss got the Timberwolves closer to the greatest chance of winning the NBA lottery for the right to pick first in the draft, dropping to a league-worst 8-38. Philly improved to 10-37. Twenty teams began Friday with more wins than the combined total (17) of the 76ers and Timberwolves. The game marked the return of Thaddeus Young (left) to Philly. A 2007 first-round pick of the 76ers, Young played seven seasons in Philly before being traded in the offseason. Young had 10 points and seven boards.

Nikola Pekovic had 18 points and Wiggins scored 15 for Minnesota. Martin, who scored 21 points on Wednesday, said before the game he thought it might take until the summer before he has full range of motion although he feels he can play at a high level now.