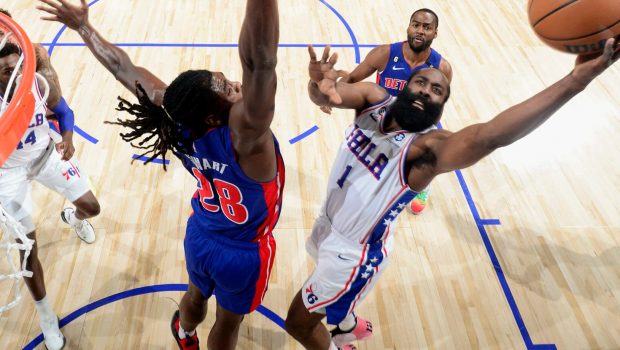 TRIP-DOUB FOR HARDEN AND SIXERS RUN PAST PISTONS!

James Harden had 20 points, 11 rebounds and 11 assists to lead the visiting Sixers to a comfortable 123-111 victory over the Detroit Pistons.

Tyrese Maxey added 23 points and Montrez Harrell scored 20 for the Sixers, who have won four of five.

Killian Hayes scored 25 points for Detroit, which has alternated wins and losses in its last seven games after a six-game losing streak. Isaiah Stewart finished with 20 points and 13 rebounds, while Bojan Bogdanovic had 20 points.

The Sixers led 71-54 at halftime, thanks to Harrell’s 16 points and Harden’s 13 points, 10 rebounds and nine assists. Harden only needed 27 seconds in the second half to complete his triple-double, setting up Tobias Harris’ basket to put Philadelphia up by 19.

Maxey had 11 points in the third to help stay in control. The Sixers outscored the Pistons 29-28 in the quarter to take a 100-82 lead into the fourth.