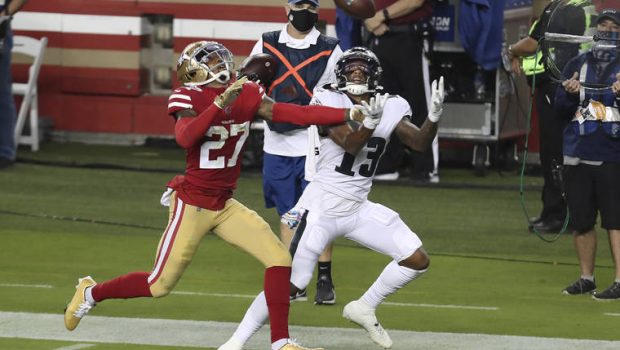 Travis Fulgham saved the Eagles last night with a late touchdown reception, and he might therefore have saved their season.

So, who is this mystery man, added to the roster two days ago from the practice squad?

Ladies and gentlemen, his name is Travis Fulgham.#PHIvsSF | #FlyEaglesFly

He played at Old Dominion, catching 128 passes for 2,044 yards and 18 touchdowns, including 63 receptions for 1,083 and nine touchdowns as a senior in 2018 and was named a second-team All-Conference USA player.

He was a sixth-round draft pick by Detroit and spent most of 2019 on the practice squad, although he did make his NFL debut last December. The Lions waived Fulgham in August and he was claimed off of waivers by Green Bay, where he lasted nine days. The Eagles added him to the Training Camp roster on August 20. Waived as the Eagles reduced the roster to 53 players, Fulgham was added to the practice squad and remained there until Saturday, when the Eagles, so banged up at wide receiver, promoted him to the active roster for the prime-time game.

At 6-2 and 215 pounds, Fulgham runs pretty well, and showed it when he released off the line of scrimmage against cornerback Dontae Johnson and used his big body to create a passing lane for Carson Wentz, who dropped a perfect pass into Fulgham’s hands. He juggled the ball just a little bit initially, stayed inbounds to reach the end zone to give the Eagles a 17-14 lead in the fourth quarter. It was a beautiful play and the second catch of the night for Fulgham, who had two receptions for 57 yards.

“After we broke the huddle, Carson said, ‘Get ready,’ so I knew it was a good shot he was going to throw the ball to me,” Fulgham told the Eagles web site. “I came off the line, kind of beat the corner, do what I do every day in practice, and we just executed,” Fulgham said. “At first, I actually lost the ball, but since Carson gave me a great throw I was able to locate it and it was right in the breadbasket, so I came up with the touchdown.”

Fulgham scored the touchdown and earned the glory, but rookie John Hightower also contributed a huge catch and conversion of a fourth-and-4 play just a few snaps before Fulgham’s big play. Greg Ward had his usual catch-everything game, but as the 49ers concentrated their efforts on slowing down tight end Zach Ertz (four receptions, 9 yards) and running back Miles Sanders (two receptions, 30 yards), the kids stepped up.

And the Eagles needed every bit of it. What made it even more remarkable was that the Fulgham touchdown was only the second time he and Wentz worked together on the play – the other time was earlier this week in practice.

“For me, that’s a regular play,” Fulgham said. “The ball’s in the air, see ball, go get it. But me and Carson, I mean, the first play we did in practice, so we just had to do the same thing again.”