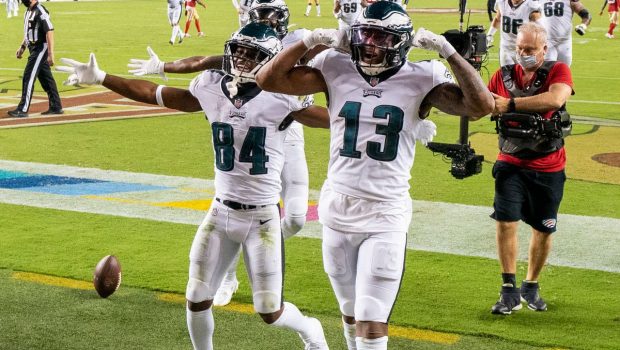 Travis Fulgham caught 10 passes for 152 yards and a touchdown, but the Eagles defense couldn’t stop the Steelers and the Birds fell to 1-3-1 with a 38-29 loss.

Fulgham nearly led the Eagles back from a 31-14 deficit as the Eagles were within 2 points with 3:18 left when Jake Elliott missed a 57-yard field goal in an attempt to take the lead.

Fulgahm’s 1 receptions matched/exceeded that of J.J. Arcega-Whiteside’s entire rookie season. Arcega-Whiteside was the Eagles’ second-round pick that year. The 152 yards were the most receiving since Alshon Jeffery had 160 against the Rams in 2018.

Eagles needed running back Miles Sanders scored two touchdowns in the first half, one from 74 yards out, the other from 1 yard out, and he finished with 80 yards on 11 carries.

Quarterback Carson Wentz completed 20 of 35 passes for 258 yards. But he threw two more interceptions, his eighth and ninth of the season, surpassing his total of 7 over 16 games last season.

Wentz hasn’t thrown more interceptions since his rookie year of 2016, when he threw 14.

And the Eagles had no answers for Steelers rookie receiver Chase Claypool. They didn’t come close. Claypool scored four touchdowns – three receiving, one rushing. His 35-yard touchdown catch, with linebacker Nate Gerry in coverage, sort of, with 2:59 left sealed the game for the Steelers.

Claypool had 7 catches for 110 yards receiving.

It was a rough start for Wentz, who was once again left shorthanded at wide receiver. He tried two deep passes, both to rookie John Hightower, and both fell incomplete.

But Wentz found a rhythm with Fulgham, who had 5 catches for 67 yards in the first half. Fulgham had a 42-yard TD reception last week against the 49ers in his first game for the Eagles. He was even better against the Steelers.

Trailing 17-14 at halftime, the Eagles self-destructed. A 58-yard gain by Ray Ray McCloud on a reverse got the Steelers down to the Eagles’ 5 to start the second half. Claypool called a 5-yard TD pass.

Then Wentz was intercepted going over the middle, giving the Steelers the ball at the Eagles’ 23. James Conner eventually scored from the 1 and the Eagles were down 31-14 with 10:32 left in the third quarter.

But the Eagles answered as Greg Ward caught an 8-yard TD pass and then Fulgham took over. His 4-yard TD reception pulled the Eagles within 2 points with 11:27 left in the fourth quarter.

The Eagles, however, couldn’t get any closer.