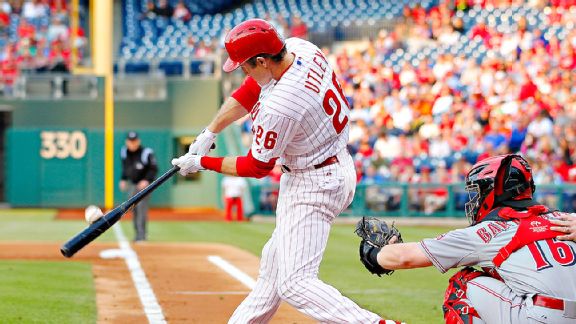 UTLEY TO ANGELS: A SURE WAY FOR PHILLIES TO BAG TOP PROSPECTS

All Phillies fans are hoping that Chase Utley gets healthy enough to play full-time real soon.

He started DH-ing last week while he has rehabbed his ankle, which injured in January.

Read why, as described by ESPN’s Jim Bowman:

The Angels have quite the competition going on right now for the second-base starting job between Grant Green, Josh Rutledge, Johnny Giavotella and Taylor Featherston. But one thing that has become obvious is none of these guys is close to filling the vacancy left by the traded Howie Kendrick, especially for a team expecting to contend for a World Series title. The Angels also need another left-handed bat to lengthen and better balance their lineup.

Their perfect solution is Utley. The Phillies are clearly in rebuilding mode, and I would think Utley would waive his no-trade rights for the chance to go to a team that led the American League in wins last year.

The Phillies obviously would be looking for a package of prospects to help them rebuild, and a package centered on Alex Yarbrough and Victor Alcantara should get the deal done for both sides. Yarbrough has good upside as a hitter — he led the Texas League in hits and doubles in 2014 — and Alcantara has a power arm and was invited to the MLB Futures Game last July.