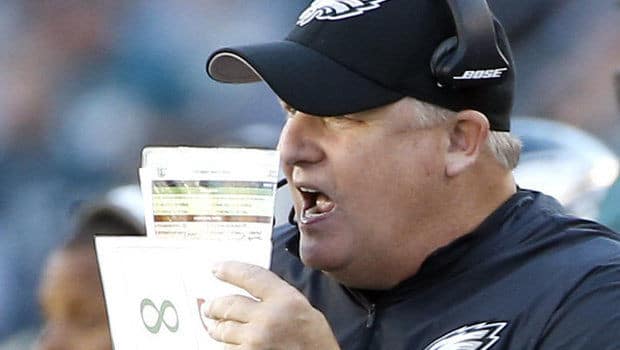 So, the Eagles are coming off their bye week at 3-4, half a game behind the New York Giants, who lead the NFC East.

This is not where we thought the Birds would be after seven games of Chip Kelly’s third season as Eagles coach.

And stupid hosts on talk radio are still hoping and praying about trading Kelly to the Tennessee Titans for draft picks!

Back in the real world, the Eagles are still in good shape to make the playoffs.

ESPN’s Football Power Index (FPI) projects there are 15 teams with at least a 30-percent chance of making the playoffs and 21 teams with more than a 10 percent playoff probability.

Now, a number of teams with losing records are in the thick of the playoff race. The Indianapolis Colts (80 percent), Eagles (64 percent) and Kansas City Chiefs (30 percent) are a few of the teams eyeing a playoff run despite disappointing starts.

Similarly, there is a 27-percent chance that the NFC East champion will win eight or fewer games. No other division has greater than a 0.2 percent chance for an eight-win champion.

Elsewhere, the Kansas City Chiefs have won back-to-back games and increased their playoff chances from 5 percent to 30 percent. They can take another major leap forward with a win at the Broncos in Week 10.