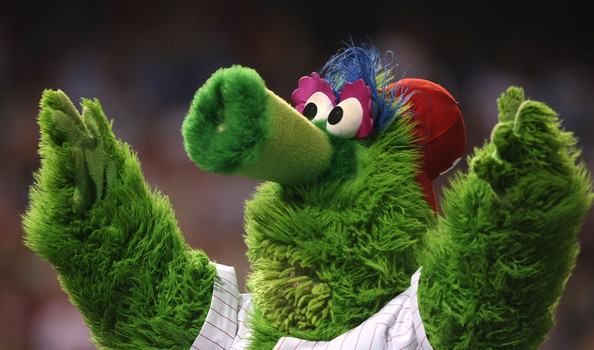 TRADE TALK ON TAP — EVERY PHIL AVAILABLE BUT THE PHANATIC

The Phillies’ season is essentially over. They are so bad and so boring that it almost hurts one’s eyes to watch them play.

So naturally, as with any old and overpaid bunch, the focus of Phils fans has turned to turnover, with seemingly every Phillie on the block, including GM Ruben Amaro Jr., whose head is on the chopping block.

The only icon we have heard no nibbles about is the Phillie Phanatic, but remember he probably also has a no-trade clause in his contract.

Ryan Howard was benched Thursday and didn’t appear too pleased about his diminished role after the game. While this makes for a potentially uncomfortable situation in the Phillies clubhouse, CBS Sports’ Jon Heyman reports that the club is “working hard” to trade him.

Of course, Howard’s trade value is essentially nothing at this point, especially after a report that the Phillies have considered releasing him after the season. With that in mind, Heyman hears that the Phillies would be willing to eat most of the roughly $70 million remaining on his contract, which runs through 2016. Still, the market for him figures to be very limited. He can also block trades to 20 teams, but might welcome a deal given his current situation.

And from L. A. comes this report from the Sons of Garvey:

Hamels has a limited no-trade clause that includes 21 teams he cannot be dealt to. However, he has pre-approved eight teams, and the Dodgers are believed to be on that short list. Imagine a Dodgers rotation of Kershaw, Greinke, Hamels, Hyun-Jin Ryu and Josh Beckett (when he returns). Hamels, 30, has proven to be a good postseason pitcher and boasts a 7-4 record with a 3.09 ERA and 1.05 WHIP in 13 playoff starts. He would immediately make the Dodgers the World Series favorites.

The Phillies, meanwhile, are in desperate need of a rebuild, and Pederson would be a major step in the right direction. He’d immediately become their best prospect, and many believe he’s major league-ready. He could take over any of the three outfield positions. Pederson currently sports a .319/.437/.568 line at Triple-A, with 11 doubles, 3 triples, 17 home runs, 42 RBIs and 20 stolen bases.

Urias, 17, would become the Phillies’ best pitching prospect. He would need a good three or four years of development before he can help the team, but he has plenty of upside. Alex Guerrero missed time earlier this season after teammate Miguel Olivo bit off part of his ear, but he’s back now and is sporting a .376/.417/.735 line at Triple-A. He could play second base or shortstop if Chase Utley or Jimmy Rollins were traded. He could also be used as a trade piece, as teams such as the Orioles, Blue Jays, A’s and Giants could all use an upgrade.

This would certainly be an unpopular deal for the Phillies to make, but the rebuilding process needs to begin sooner rather than later.

Well the other thing is, this would certainly be an unpopular deal for the Dodgers to make! After all, two of the three of these prospects were on the aforementioned Top 50 Prospects list. Let’s hope Ned Colletti doesn’t do anything foolish.