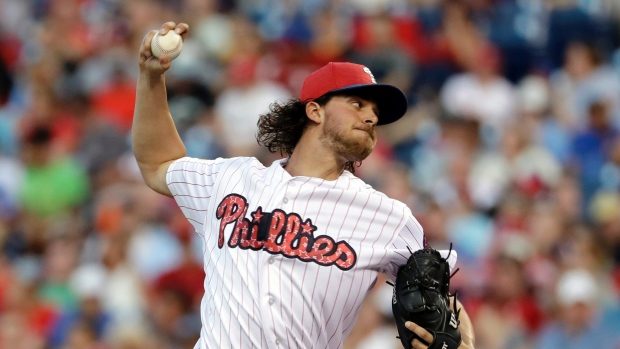 TRADE DEADLINE 17 DAYS AWAY, AND HERE’S PHILS’ STATE OF PLAY!

The Phillies are the worst team in baseball, and with the July 31 trade deadline on the horizon here’s what we think of the players currently on the roster:

Altherr emerged as a starter in the spring. The outfielder hit 14 home runs, has a .356 on-base percentage and a .530 slugging percentage.

Injuries hampered him the past two seasons, but the 26-year-old Altherr has established himself as a reliable corner outfielder.

Galvis, 27, is one of baseball’s best defensive shortstops and has developed into a team leader.

Galvis is never going to be a great hitter. He has a .301 on-base percentage. But with his defensive ability and power — 20 home runs last year and 10 this season — he could hit eighth for a winning team.

The 24-year-old starting pitcher has overcome injury to return to the form he showed as rookie in 2015.

Pivetta, 24, has made just 11 career starts, all this season. But it’s his ability to strike batters out that makes him valuable.

Pivetta has struck out 62 in 59 innings, an average of 9.46 per nine innings. His fastball averages 94.4 mph. The Phillies simply don’t have many power arms like Pivetta’s.

Too soon to say

Franco, 24, is in the midst of a disappointing season.

He’s batting .217 with a .384 slugging percentage. Franco has not been the player the Phillies expected him to be.

But the Phils can’t give up on him yet. He’s young and hits the ball hard.

The second baseman showed promise during the second half of last season. He batted .298 with a .413 on-base percentage after last season’s All-Star break.

That gave the Phillies some hope for the future.

But Hernandez, 27, hasn’t been able to build on that performance this season because he’s been out since June 9 with an oblique injury. He began a minor league rehabilitation stint this week.

The 25-year-old starting pitcher may be the most frustrating of all the Phillies’ young players.

His average fastball is 94.5 mph. Velasquez strikes out 9.54 batters per nine innings.

But he has pitched fewer than six innings in seven of his 10 starts this season. Still, power arms like Velasquez’s are worth the patience they can require.

The center fielder is the most confounding of all Phillies. He was an All-Star last season. He is a standout defensive player.

Still, the Phillies should trade him.

Herrera also makes too many mental mistakes, such as running through stop signs and getting picked off third base.

Herrera is a good player for a bad team. He would cost a winning team with victories with his mental lapses and streaky hitting.

The first baseman has hit 15 home runs and knocked in 43 runs. He has an excellent clubhouse presence. But the Phillies should still trade him.

Phillies management has said it’s not fair for Hoskins and Joseph to share time. Hoskins, 24, is the better prospect.

All three are veterans and all three must go before the July 31 nonwaiver trade deadline.

Kendrick has been troubled by injuries but is batting .349 with a .409 on-base percentage.

Hellickson (5-5 with a 4.49 ERA) is on a one-year contract. The Phillies didn’t deal him last season. It would be a mistake not to trade him this season.