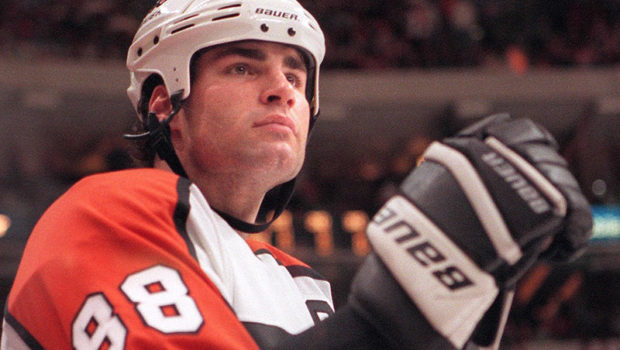 THE TRADE THAT BROUGHT LINDROS HAUNTED THE FLYERS FOR YEARS!

In order to acquire Eric Lindros, the Flyers gave up: $15 million, two first-round draft picks, and six players, including Kerry Huffman, Steve Duchesne, Chris Simon and Mike Ricci. The Flyers also gave up franchise goaltender Ron Hextall, who would spend two years away from the team before returning in 1994. Mediocre years under Dominic Roussel and Tommy Soderstrom made it clear that the team needed a big name in net in order to win.

Eric Lindros refused to play for the Quebec Nordiques, who drafted him, and demanded a trade.

Nearly all NHL teams drooled over the possibility of acquiring the 245 pound center with an undeniable scoring touch. Ultimately, the Flyers would win the Lindros sweepstakes amid controversy, and the team would play many successful season with Lindros as its captain.

But in retrospect, for all of Lindros’s successes, the Flyers were on the losing end of that trade.

The most painful piece of that trade is the final piece: Peter Forsberg. For all of Lindros’s talent, for all his toughness and the speculation about what would have happened without the injuries, Peter Forsberg simply developed to be the bigger star in the end.

Forsberg would win two Stanley Cups with the Colorado Avalanche (the Nordiques moved to Denver soon after the Lindros trade) and sits tenth all-time in points per game.

Somehow when Lindros refused to play for the team that drafted him, the Flyers failed to get the impression that he was a bit of a diva, but that became clear soon enough. Lindros and GM Bobby Clarke were infamously at odds toward the end of his tenure with the Flyers, and Lindros sat out the entire 2000-01 season waiting for a trade.

The Lindros experiment was not a complete failure. He had a lot of success with the team. But the trade was one of the most dramatic in history, and the fact of the matter is Eric Lindros was not worth trading Peter Forsberg ALONE, much less as part of the gigantic trade package the Flyers put together.