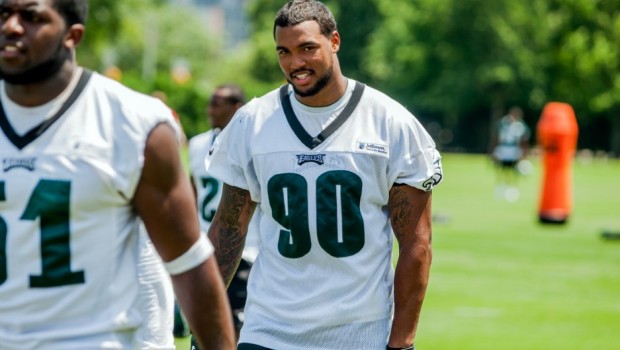 When Tra Thomas was shown the coaching door by Eagles Supreme Leader Chip Kelly, the former Birds lineman took it well and said so.

Now? Not so much.

Thomas spent 11 years as a player on the Eagles, and the last two years on their coaching staff, before Kelly informed him go this week that he won’t be coming back. On his way out the door, Thomas had some harsh words for one of the players he coached.

Thomas, who was a left tackle in his playing days, tried to work with Eagles first-round draft pick Marcus Smith (photo above) to help him learn to be an NFL pass rusher. Thomas says the problem with Smith — who didn’t record a single tackle in his rookie year — is that he simply isn’t strong enough to go up against NFL offensive linemen.

“He’s definitely going to have to get a little stronger out there because when you look at even his body type, he has the build of like a high school athlete still — a young college athlete,” Thomas said on Comcast SportsNet. “He needs to put on probably about a good 15 to 20 more pounds so he can really execute and be a effective out there.”

Thomas also indicated that he thinks Smith could make improvements similar to those of Connor Barwin, the Eagles linebacker who improved from five sacks in 2013 to 14.5 in 2014. So he’s not saying Smith can’t be a good player some day. He’s just saying Smith has a long way to go.