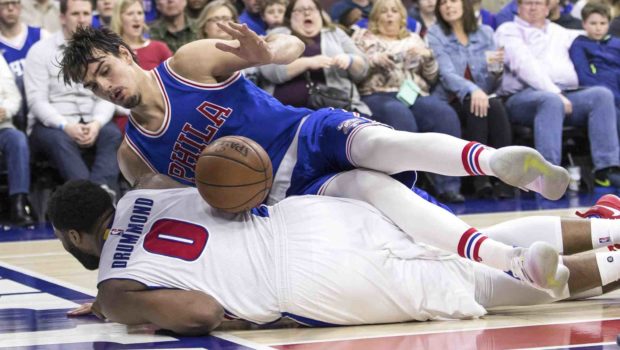 Kentavious Caldwell-Pope scored 13 of his 26 points in Detroit’s dominating third quarter, and the Pistons set a season high for points while rolling to a 136-106 victory over the Sixers last night at the Wells.

Reggie Jackson played 25 minutes, down from his season average of 28, but was pleased with the end result.

The Pistons, holding the final playoff spot in the Eastern Conference, had lost two of three, including Wednesday’s 109-86 drubbing at New Orleans.

Marcus Morris scored 22 points, Tobias Harris added 20 and Andre Drummondhad 14 points, 14 rebounds, four steals and three blocks, one game after getting ejected for swatting the Pelicans’ Tim Frazier in the back of the head.

Already short-handed due to the loss of Joel Embiid (knee) for the season, not to mention the absence of No. 1 pick Ben Simmons (foot) all season, Philly was without center Jahlil Okafor (right knee soreness) while playing the second game of a back-to-back set. Nik Stauskas had 24 points to pace the 76ers.

“When you have a really good team against nine guys in a back-to-back situation, it’s a perfect storm to the environment,” coach Brett Brown said.

The Sixers were playing one night after a 105-102 home win over the Knicks.Justin Anderson, who tied his career high with 19 points Friday while playing strong defense against Carmelo Anthony, had five just points against the Pistons.