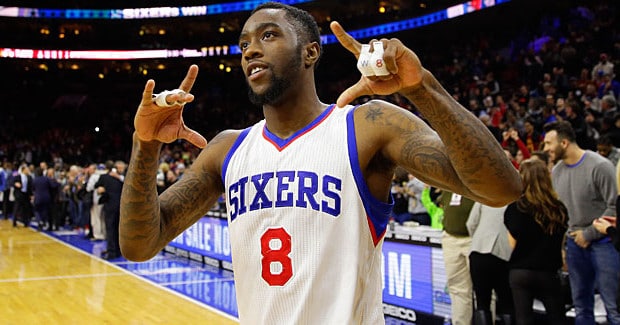 Sixers fans will be pleasantly surprised today when Tony Wroten, a talented guard who tore his ACL last season, returns to the roster.

“I’m not really nervous. I’m more anxious and excited,” Wroten said on Friday, after the Sixers’ practice at PCOM.

“Haven’t played [in] 10 months, and to be able to be less than 24 hours away from coming back, I’m just looking forward to [Saturday’s] game. I just want to be out there helping my team, playing in front of the great fans, see where it takes us.”

Coach Brett Brown, who’s had to manage a roster riddled with injuries since the start of training camp in late September, is psyched:

“Kamikaze energy. Downhill progression,” Brown told the Sixers web site, discussing the advantages of Wroten’s skill set. “There are problems at times with that because he hasn’t played for so long that you’re going to expect some turnovers, and expect to play in a crowd. But, I’ll trade all of that to have him back, and to have his, in our world, seniority, our version of a veteran. I’m just really excited for him, and for us, that we can welcome him back.”

At the time he hurt himself, Wroten was leading the club in scoring, averaging 16.9 points per game. The then 21-year old had reached the 20-point mark 13 times in his first 30 appearances, including a career-best 31-point effort against the Chicago Bulls in the second week of the season. He also ranked second on the Sixers with an average of 5.2 assists per outing.

Wroten, however, considers himself even more “explosive” now than he was before rupturing his ACL for a second time. He suffered the same injury while playing football during his junior year at Garfield High School in Seattle. Wroten described a “night and day” difference in his knee following this latest operation, and is “just excited to show the world” he’s a “total new person with the same mindset.”

“I just want to do what I need to do to win, help the team win, help my teammates, because we have a lot of pieces,” Wroten said, adding that he feels he can be a “closer” for a young team that’s been involved in tight games lately. “We got shooters. We didn’t have a lot of those last year. We got great bigs getting better. I feel like my talent can help.”

Like Wroten, Kendall Marshall was placed back on the active roster on Friday. Like Wroten, Marshall has also been recovering from a right knee ACL tear. His injury occurred last January as well, two days after Wroten went down versus Atlanta.

The parallels don’t stop there. Each was a first round pick in the 2012 NBA Draft. Marshall was chosen 13th overall by the Phoenix Suns, while Wroten was selected 25th by the Memphis Grizzlies. Reflecting on recent months, Marshall said that spending time with Wroten has helped the two form a stronger bond.

“I think since we were both drafted, four years ago now, there’s always been this tension between us,” Marshall admitted. “Naturally, when two guys play the same position, you’re going through draft workouts, you’re just not going to like the guy. I didn’t know him, but that’s just how it goes. I don’t like anybody that plays the same position as me. But, when you hang out with somebody, you become teammates, you rehab together, you start to talk basketball, and you learn about the guy, it naturally brings you closer, and I think it will help us on the court.”