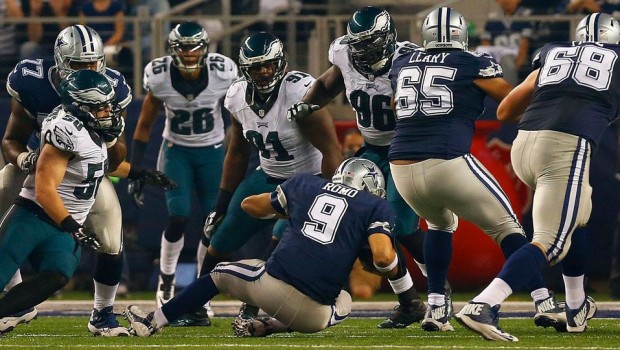 TONY ROMO NEEDED TO GET SOME THINGS OFF HIS CHEST

With the biggest game of the Cowboys season coming up — the rematch with the Eagles Sunday night after the Birds smacked Dallas 33-10 on Thanksgiving — Tony Romo needed to clear the air.

Or bare his breast.

Or get some things off his chest.

Romo has not been playing with broken ribs this season.

The Cowboys quarterback has been dealing with torn rib cartilage. That was clarified by Cowboys coach Jason Garrett during his Monday press conference and again later in the day by Romo during a local radio interview.

“I think everything got blown out of proportion with just talking about injuries and such after the game,” Romo said on 105.3 The Fan [KRLD-FM]. “I’ve been asked a little bit about the rib stuff. It’s just cartilage that you end up having issues with really for your career.

“When you go through and you have stuff happen when you’re younger, they just kind of pop up from time to time as you get older. You kind of deal with those things. For me, this season has been trying to recover from the back. Some of the other stuff that has been talked about has been a little exaggerated.”

After Thursday night’s win in Chicago, Romo revealed that on top of the transverse process fractures in his back, he’s also been battling broken ribs. The cartilage issue is no longer bothering Romo. Strengthening his back is the top priority.

“I just think you put in time and you get healthy and strengthen your core and your glutes and all those things to make sure that you’re able to put your best foot forward and get stronger in your back,” Romo said. “That’s what I’ve been doing, and it’s been good.”

The NFL had been investigating whether the Cowboys violated the league’s injury reporting rules by not disclosing the information for their official injury/practice report.

That report has included Romo’s back injury, which Garrett says is the only one that has caused Romo to miss practice.

“He’s missed practice on Wednesdays because of his back issues, initially coming back from the surgery, not having those consecutive days of practice and then at a certain point when he fractured the two transverse processes,” Garrett said. “That’s why he has missed that time, not because of his ribs.”

Asked if the issue has been resolved between the Cowboys and the league, Garrett responded: “It seems like it’s a non issue.”