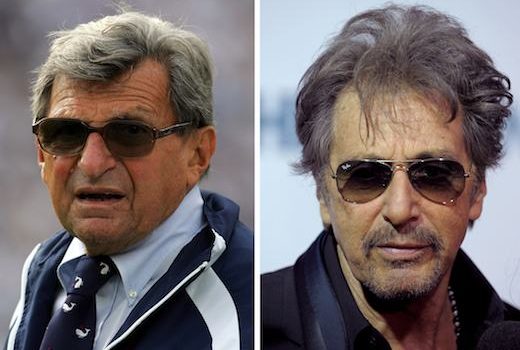 TONIGHT’S PACINO AS PATERNO: THE COACH, THE MAN AND THE MYTH

HBO’s “Paterno” is a film about a real-life sex-abuse scandal in which the abuser and the abused are relegated to supporting roles. A dogged reporter (Riley Keough) and one brave victim (Benjamin Cook) get a fair bit of screen time to help fill in the historical record, but they’re not at the center of the story. Jerry Sandusky, the perpetrator, is relegated to a cameo.

The writers, Debora Cahn and John C. Richards, and the director, Barry Levinson, focus instead on Joe Paterno, the beloved head coach of the Penn State football team who froze in the headlights and got run over by history. There’s a lot of clamor and fuss in “Paterno,” which has its premiere Saturday, but at heart it’s a film about the lack of action — about things that didn’t get done.

The tightly constructed film — at 1 hour 40 minutes, it’s a chamber piece by current television standards — is set during two weeks in 2011, before and after the indictment of Sandusky, the former Penn State assistant football coach, on 52 counts of sexual abuse of minors. Paterno, whose epic career ended when he was fired a few days after the indictment was announced, lies inside an MRI machine (he died of lung cancer in January 2012), and we watch both recent and more distant events as he recalls them.

Al Pacino plays Paterno, and in keeping with the film’s conception, he gives a tamped-down, contained performance. His Paterno is still intelligent and possessed of the quick, pragmatic instincts of a leader at 84, but he’s hollow: His life is built around a work ethic, and his fatal failure to follow through on reports of Sandusky’s crimes isn’t about corruption or complicity, it’s about single-mindedness. He simply won’t allow himself to be distracted from football: