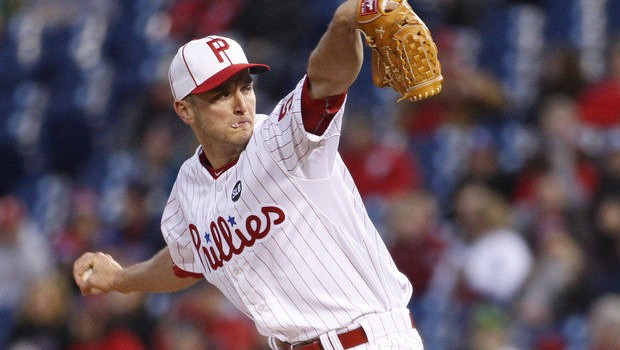 Nobody will confuse the 2015 Phillies with the 1927 Yankees.

In any way, shape or form.

The Phils simply cannot hit the ball safely, which in the grand scheme of things is a vital element of a successful baseball team.

Chase Utley is 2 for 22 after going 0 for 3 on Monday, though he’s 4 for 13 off Matt Harvey. Ryan Howard is 1 for 8 with five strikeouts when facing Harvey and is the only other current Phillie with a hit against him.

Harvey dazzled in his first start in almost two years, looking like every bit the pitcher he was before being injured.

He’ll look to top that performance in his return to Citi Field on Tuesday night against the Phillies.

Harvey concluded his long road back from Tommy John surgery in October 2013 on Thursday, striking out nine while allowing four hits and one walk over six scoreless innings to outduel Stephen Strasburg in a 6-3 win at Washington.

“When you’ve got a No. 1 guy that you can run out there and you know that, hey, we give him two to three runs a game and he’s going to win 20 games – we got that animal,” manager Terry Collins said. “He’s going to change the dynamic of what our club is all about.”

Harvey, working on what was defined as a soft pitch count, threw 91 pitches. He averaged 102.1 pitches in his first 36 starts.

“For me I think 90 pitches through six innings is not good enough,” he said Monday. ”I think if I’m throwing 90 pitches I’d like to get at least into the seventh, so I think tomorrow definitely early attacking a little bit more, a little bit better, a little more fine, and try and get us later into the ballgame.”

”I think your home crowd is always behind you, and for me they’ve been great. They’ve always been extremely supportive and very uplifting for me,” Harvey said.

Harvey is trying to give the Mets (4-3) their third straight win after a 2-0 victory in Monday’s home opener. New York continued to enjoy solid pitching, with Jacob deGrom tossing the club’s fifth quality start by limiting Philly (3-4) to seven hits in 6 1-3 innings.

“Now we get to see the big boy tomorrow,” Collins said. “That’ll be fun.”

The reliability of the rotation has been particularly important given the Mets’ .209 batting average with only eight extra-base hits. Hitters have shown good patience, though, drawing 14 walks over the last three games. Curtis Granderson is 1 for 18 but has walked nine times.

Philly gives the ball to David Buchanan (0-1, 18.00 ERA), who gave up six runs and seven hits with four walks over three innings in Thursday’s 6-2 loss to Boston. All the runs came with two outs in the third inning, which included three infield hits.

Philadelphia’s Freddy Galvis is 10 for 19 during a five-game hitting streak.