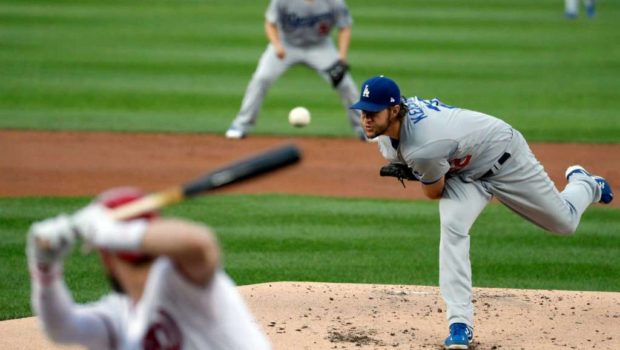 TONIGHT’S MATCH-UP: CUBS VS. BEST PITCHER ON THE PLANET!

The Chicago Cubs have two chances to win one game and end the endless Series drought, starting tonight in Game 6 of the National League Championship Series against Dodgers ace Clayton Kershaw (above).

He also goes by the acronym BPOTP — Best Pitcher On The Planet.

“The more you face him, maybe you have a better shot, but he’s really good,’ catcher David Ross said. “We have our work cut out for us, and, to quote Ric Flair, to be the best you have to beat the best. Woo!

“We have to face one of the best, if not the best.”

Kyle Hendricks, who led the major leagues in earned-run average, will face Kershaw with a chance to shake the 102-year-old foundation of Wrigley, as happened during Miguel Montero’s Game 1 grand slam. And if that doesn’t work, there’s always Game 7 on Sunday, when Jake Arrieta would meet former Cub Rich Hill.

“Game 6” once struck fear into the hearts of Cubs’ fans, thanks to the Marlins’ eight-run eighth-inning in their Game 6 victory at Wrigley in the 2003 NLCS. That night somehow has been erased from their collective memories, and fortunately no video evidence exists to replay over and over again.

Game 6 will be all about “right now,” one of Joe Maddon’s many mantras, with no good reason to believe the past is prologue. The Cubs offense has been hit-or-miss this series, scoring 26 runs in the three games neither Kershaw or Hill pitched, and none in the games the two lefties started.

The key for the Cubs may be whether there’s enough stuff in Matt Szczur’s locker to go around. Szczur credited “good karma” when Rizzo broke out of his slump with Szczur’s bat, and Addison Russell did likewise with his leggings.

“I feel like a lot of things happen for a reason,” Szczur said.

The Cubs for years have battled the perception they have bad karma, based on one lousy century and all the extraneous baggage they carry, like the goat and the Game 6 foul ball.

Believe it or not, the players don’t care about perceptions, and have mocked the baggage. When Kris Bryant was sent down to the minors at the start of 2015 despite leading all major leaguers in home runs in spring training, he wound up making a light-hearted commercial for an energy drink that ended with him traveling to Chicago on a bus with a goat.

“Once we saw it, I said ‘Yeah, that looks good. Let’s do that,'” agent Scott Boras said. “If he can’t play in the big leagues, at least we can kill the curse.”

It was a bold move, even for a hot prospect like Bryant. But Cubs President Theo Epstein said he didn’t mind it at all.

“Curt Schilling, when we traded for him in Boston and before he even played a game for the Red Sox, he made a commercial saying ‘I’m going to Boston to break an 86-year-old curse.’ It showed a little bit of bravado, some swagger. I’d rather guys face this stuff head on than evade it.”

This Cubs team has a swagger unlike any other in recent memory, and after suffering back-to-back shutouts in Games 2 and 3, it rediscovered that swagger in the nick of time.

Kershaw seems swagger-proof, but we soon will find out.